According to an Acura dealer national meeting attendee's furtive report from the Aria hotel in Las Vegas, the new Acura NSX that'll reportedly be shown at next month's Detroit Auto Show will look extremely similar to Tony Stark's car in the upcoming Avengers movie. But wait, there's more.
It'll also be, according to our tipster, a "hybrid" — yes, you read that correctly — and "will hit dealer showrooms in 24 months."

Now we want to see just how close it'll look to the Avengers car because, if you'll remember, Acura spokespeople told Autoblog that that car was nothing more than a one-off built for the movie. Likely true. But imagine that vehicle as a hard-top and we think that's likely what our tipster saw.

All we know is we're getting more and more excited for the Avengers movie. Oh, yeah, and also the NSX — although we're not so sure how that "hybrid" thing is gonna work out. 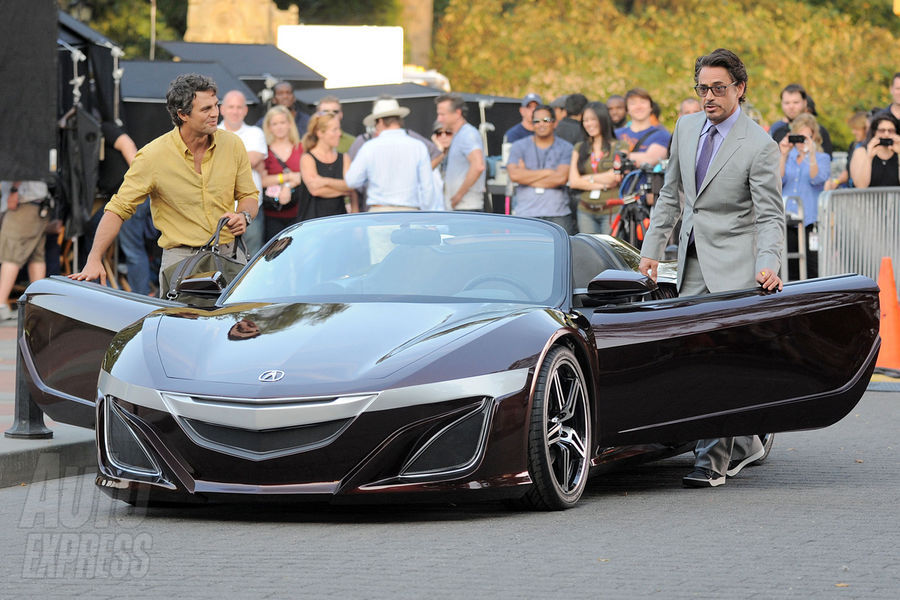 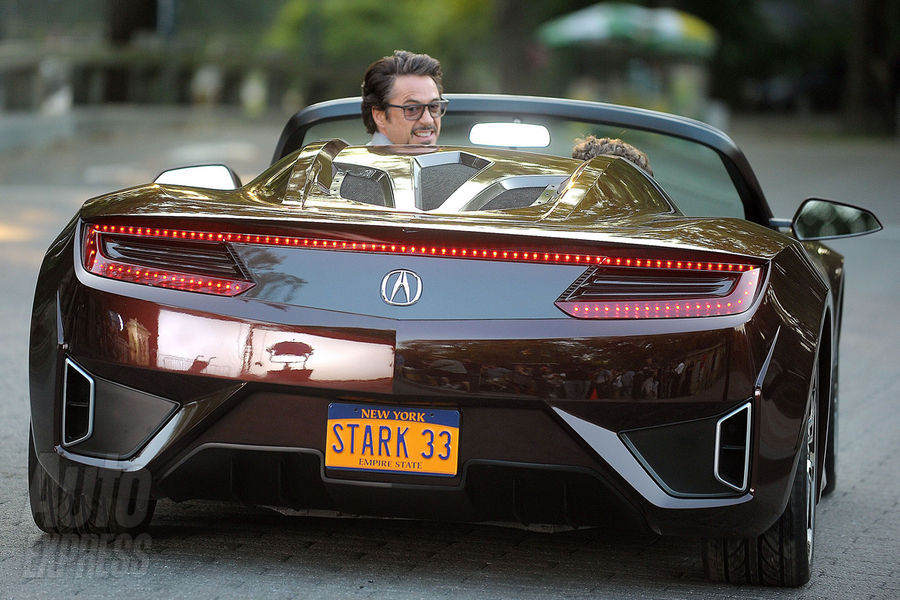 Despite seeing the spy photos and technical sketches, development the Acura NSX successor came to a halt in late 2008 for various reasons. Now Acura has announced a concept version of the next generation Acura NSX super car will make its debut at the Detroit Motor Show on January 9. Previous reports place a 3.5- to 3.7-liter V6 hybrid engine with two electric motors under the hood of the aluminum bodied NSX. It is expected to reach the market by 2014.

Although the NSX concept will take center stage, Acura will also debut the Acura ILX Concept compact sedan. Based on the 2012 Honda Civic, the ILX Concept is a styling preview of the new model that will launch in the spring 2012. The ILX will feature three powertrains including Acura's first-ever gas-electric hybrid with a 1.5-liter engine producing 95 hp (71 kW / 96 PS) through a CVT transmission. The other two engine choices include 2.0-liter and 2.4-liter four-cylinders with automatic transmissions.

Acura also will unveil a prototype of the 2013 RDX, the second generation of Acura's five-passenger SUV. Underpinned by the Honda CR-V, the RDX will receive a V6 engine for the first time. It will be more powerful and efficient than the current RDX's 240hp (179 kW / 243 PS) 2.3-liter turbo four-cylinder and is also exspected to join the ILX with a market launch in the spring.

The Honda NSX Is Alive!

The Honda NSX Is Alive!

Apparently it was at the 40th Toronto Auto show last week, which I was supposed to attend...

Will be shown on August 4th

The Acura NSX is inching closer to production as the company has released a Vine of the model undergoing testing.

The latest clip doesn't reveal much but it suggests Acura is gearing up for a massive social media campaign ahead of the prototype's debut at the Mid-Ohio Indy 200 on August 4th.

We should learn more this weekend but the prototype clearly resembles the updated NSX concept which debuted at the North American International Motor Show earlier this year. Despite the similarities, we can see the prototype features new headlights, larger mirrors, restyled air intakes and prominent "#AcuraNSX" badging.

Acura has been coy on powertrain details but previously confirmed the model will have a mid-mounted V6 engine and a Sport Hybrid Super Handling All Wheel Drive (SH-AWD) system with two electric motors that power the front wheels and another motor that is integrated into a dual-clutch transmission.

Honda has confirmed that it will be competing in Japan’s Super GT series in 2014 using a version of the all-new NSX, a car that has just been spied running its first shakedown laps.

Little is known about the new race car, which will replace the HSV-010 GT in the series, other than the fact it will compete in the top-tier GT500 class and should then make around 500 hp.

While not visible in this photo, the writing on the side of the car reads NSX-GT Concept.

Interestingly, the race car’s styling is a far departure from what we’ve seen from the NSX prototype thus far. Keeping the street car’s nose, the rear looks more like something styled after the German DTM series cars. And there’s good reason for that, as starting in 2014 both the Super GT and DTM series have decided on a shared homologation structure, to ensure that cars will be able to compete in either series. 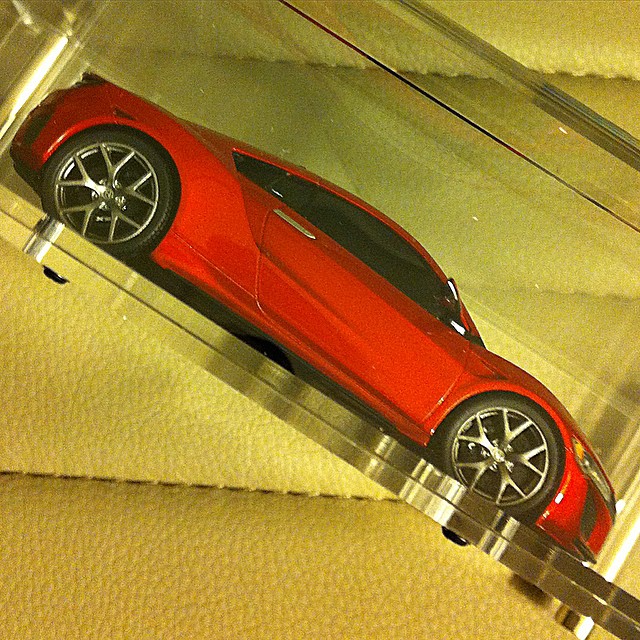 We’ve seen and heard a lot of Honda’s all-new NSX hybrid supercar over the past few years.

The twin-turbocharged V6 hybrid four-wheel-drive coupe has appeared at more than half a dozen motor shows, firstly in concept form at Detroit in 2012 and then in production spec at Motown this year.

So when it finally goes on sale globally early next year (Australians will have to wait until the second half of 2016), Honda and its fans will rejoice at the second coming of Japan's original supercar.

But while the standard NSX will deliver an impressive 404kW through a sophisticated 4WD system and should costs less than $200,000, news out of Honda reveals the company is preparing an even hotter Type-R version, which could exceed 447kW (542HP) and land in showrooms by 2018 with a price closer to $250,000.

These numbers are a long way away from those presented by the first NSX, which broke new ground and shocked the European-dominated supercar world by combining all of Japan's latest automotive technologies 25 years ago.

Like the original NSX of 1990, whose myriad of world-first technologies – such as an all-aluminium monocoque body, four-channel anti-lock braking, electric power steering and VTEC valve timing -- forced the likes of Ferrari to stand up and take notice, the 2016 NSX will boast a whole new array of technologies that will push the envelope once again.

It also incorporates a unique hybrid system incorporating a nine-speed dual-clutch automatic transmission and electric motor at the rear, with two other independently operating electric motors positioned on each side at the front-end.

Several manufacturers have been experimenting with high-performance hybrids like Porsche with its 918 Spyder and Ferrari with LaFerrari, but those million-dollar hypercars are in a different league of performance and efficiency.

However, how will wind up the new NSX's aggression significantly with the top-shelf Type-R version, which will be more powerful, lighter, quicker and faster.

In comparison to the standard NSX, which is rumoured to tip the scales somewhere between 1600 and 1700 kg, a source close to Honda tells us that the Type-R will receive a strong diet of carbon-fibre body panels and aero parts to replace some of the NSX’s aluminium and high-tensile steel panels.

The strict weight-loss program should drop the kerb weight of the NSX Type-R – an artist's rendering of which is pictured here, courtesy of Japan's Best Car magazine – to around 1550kg.

But we understand Honda also plans to tweak the V6 petrol-electric powertrain to deliver upwards of 447kW (599HP) at 7200rpm, which in concert with the nine-speed DCT should lower its 0-100km/h acceleration time to around three seconds.

Expect Honda's flagship Type-R to also come with a stiffer, track-focussed suspension set-up, unique design elements inside and out, and enough bang for your bucks to raise the eyebrows of the world's hypercar makers once again. At long last, the Honda NSX is here. But a hardcore, track-orientated NSX ‘Type R’ could also be in the pipeline.

Thought that might have piqued your interest. Honda’s NSX team confirmed that a limited edition version of the 573bhp, four-wheel-drive hybrid supercar could appear in the future.

Nick Robinson, one of the NSX’s development leaders, said a potential Type R version could lose a considerable amount of weight compared to the standard, 1,725kg car.

“There are places were weight could be cut out,” he said. There is scope then, to lose both the front electric motors – remember the NSX comes with three – along with the batteries, to make it rear-wheel-drive only.

What would remain of course, are both the 500bhp 3.5-litre V6 and the third motor attached to the flywheel. So it’ll be drifty, then. And potentially even more powerful than the standard NSX.

Of course, Honda has yet to sign off on a NSX Type R, and though there are lots of people within the company who want to see one happen, we’re unlikely to see it anytime soon. And anyway, before that car arrives – if it arrives – we’ll likely see an NSX Spider up first. Kind of like the one Iron Man drove in the Avengers Assemble movie.
Top
Advertisement
Post Reply
46 posts