Hi All,
I have a problem with my 2002 Nissan Sunny (almera) from Singapore. It originally had a QG16, but put in a QG18 which worked pretty well for years after.

Recently I changed the head and block to another QG18, as recommended by a mechanic for a tapping noise in the engine. He said it was the quickest and easiest solution and I wanted my car back as soon as is could. After the change, the car exhibited rough idling and cutting off. The head and block was then changed with another QG18.

Now, the car most often (but not always) hard starts really badly, and idles noticeably roughly, but otherwise drives perfectly. No engine check light comes on. The mechanic recommended changing my ECU.


My questions are:
1. Can I do a diagnostic on it to check for problems, even if there is no check engine light?
2. Is the 2002 Singapore Almera ECU the same as the 2002 Japanese Almera?
3. Any suggestions I can try, or anyone you can recommend I can go to? I live in Freeport and work in Chaguanas.
Last edited by rmlmv on February 27th, 2014, 8:01 pm, edited 1 time in total.
Top
Advertisement

Thanks for the reply.

Regarding the check for vacuum leaks, I'm not sure if I'm doing it correctly, but I'm checking the black plastic assembly which holds the air filter, MAF sensor and throttle body. What I saw was a crack where that black plastic assembly connects to the throttle body. I'm wondering if this would make a difference. Yes there is a crack, but it seems to be small, and mostly after the circular metal adjustment which tightens the plastic to the throttle body. Was a but afraid (will not lie) to use the lighter fuel method to test it (not sure if you know what I'm talking about. I will take a pic of it later and post it up.

Below is not my car but just want to explain what I'm talking about: 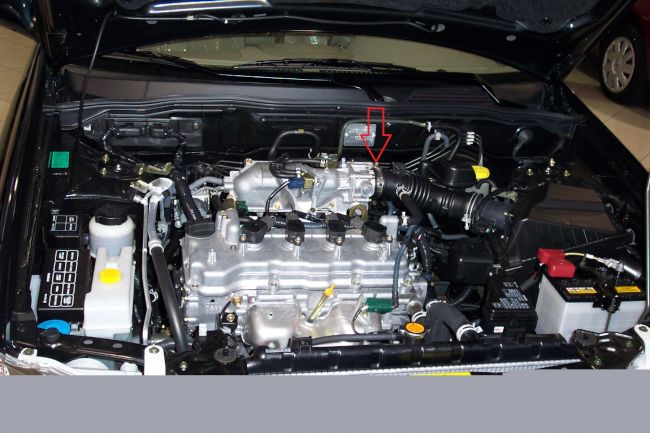 This is the crack I was talking about: 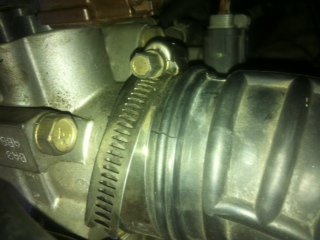 Can I do a diagnostic on it to check for problems, even if there is no check engine light?

I'll also see if I can disassemble the Idle Air Control valve and motor and clean them tomorrow.
Top

So after changing ignition coils (used) and coolant temp. sensor (used), with no change in problems, I did my own digging up in the car for a few days.

Wife started to doubt meh, telling meh I only making it worse and I'm not a mechanic.

Figured out, by a bit of luck, that the issue had to do with my EGR system. When I cleaned this part, it worked fine for a short while... but problems resurfaced. I then found a pic similar to the below on the Internet, but basically has the same information. Switched around the two hoses and car is now perfect!

Very relieved! Haven't told the two mechanics who had hands in changing the head and block yet though. I want to tell them just for their knowledge too. Everyone makes mistakes, but I just wish I didn't spend all the money trying to figure it out.

Hey sorry for bumping this post back up.. but I have the same crack in the tubing entering the throttle body.. can i put silicone on it and seal it? How did you correct urs?
Top
Advertisement
Post Reply
7 posts • Page 1 of 1

Users browsing this forum: No registered users and 7 guests