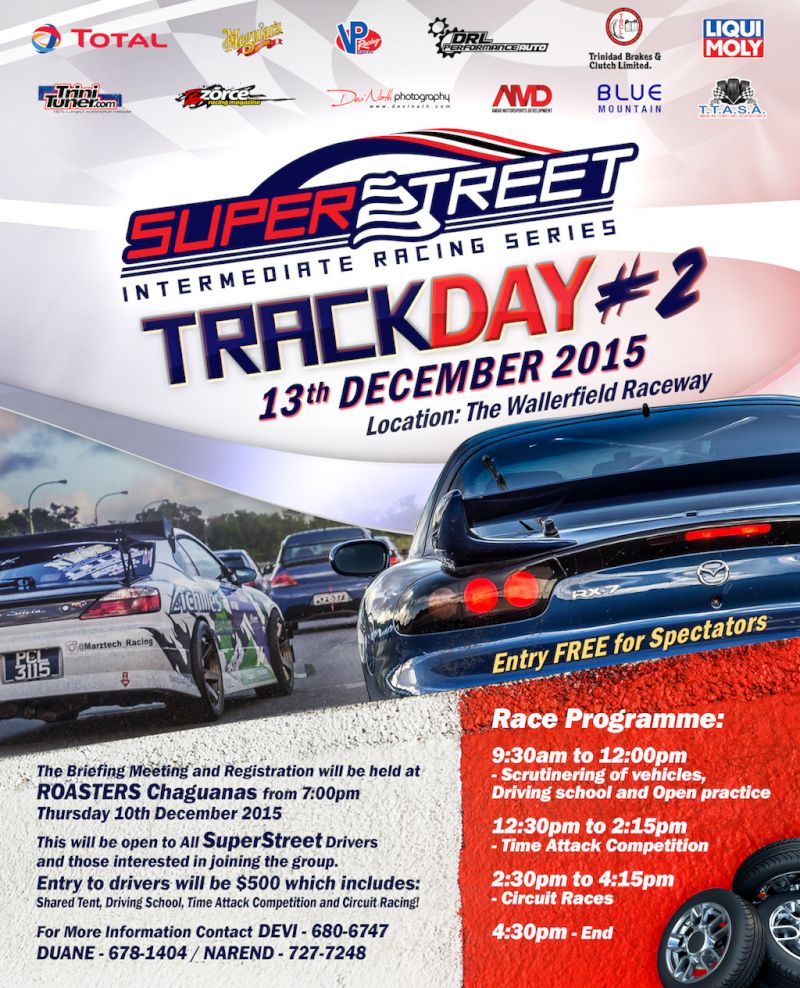 We're having our second track day this Sunday open to all SuperStreet drivers and to anyone interested in joining. Entry to drivers is $500 which includes a shared tent, Driving School, Time attack and Circuit competition entries.

The briefing meeting and registration will take place at Roaster's (formally Mojo's) on Thursday, 10th December at 7:00pm. See the attached Flyer for more details.

Also look out for some Time Attack passes from some real exotics!!!
Top
Advertisement

Safety requirements for vehicle wishing to enter are as follows

1) Vehicle must be in good working condition as is the norm for any kind of racing...no cracked or worn brake rotors, fresh brake fluid, no leaks, body in good condition, steering, and suspension in good condition, bolted down fire extinguisher no smaller than a 2.5 lb and Tyres allowed are no less than D.O.T 100 TW.

2) Drivers will need a Nomex Racing Suit or Nomex coverall long sleeve for the circuit Racing, Long pants and short sleeve shirts will be allowed for the Time Attack competition only( no short pants, sleeveless shirts and slippers allowed.

3) Helmets must be in good condition and have your name and blood type on it.

4)Your Race numbers must be clearly visible on the sides and front of vehicle.

5) The tow points on the vehicle must be clearly marked.

6) For Time Attack factory seats and 3 point seat belts will be allowed. You will need a proper seat which will allow the proper use of at least a 4 point harness for Circuit Racing.

7) You will need at least a 4 point harness. for Circuit Racing

You will have to participate in a driving school at Wallerfield on Sunday morning where you will be evaluated by an experienced driver before being allowed to compete in any of the racing events.
Top

All forced induction cars multiply by a factor of 1.45 to determine engine CC's

All suspension ,engine and weight modifications are free

Tyres allowed to a minimum treadwear of 100

Other configurations will be decided by a presiding panel.
Top

good luck to all entering
Top

DEVI wrote:5) The tow points on the vehicle must be clearly marked.

does this apply for the time attack cars too, or just circuit?
Top

Tow point indicators are for both Circuit and Time Attack.
Top

DEVI wrote:Tow point indicators are for both Circuit and Time Attack.

Yes that will work kevin
Top

So drivers who cannot attend the meet this evening, how can they pay and register? Also, are numbers given or do drivers get to choose their own? My car has a spot in the bumper to screw in a tow hook. Will it be sufficient to have the tow hook screwed in place or does it still need to b marked?
Top

civicious wrote:So drivers who cannot attend the meet this evening, how can they pay and register? Also, are numbers given or do drivers get to choose their own? My car has a spot in the bumper to screw in a tow hook. Will it be sufficient to have the tow hook screwed in place or does it still need to b marked?

use a yellow or red tape cut like an arrow to mark d tow point.... it's mandatory safety ting...
Top

Please note Entries have been closed off!
Top

that's a great , competitive field.....
the weatherman has ordered a cool, sunny day for this action


Wallerfield: Alive with the Sound of Street Cars

Following the recent International Drag Racing meet, the track at Wallerfield was reconfigured to circuit mode to host the Super Street Intermediate Racing Series’ second Track Day event of 2015. Bridging the gap between seasoned drivers of popular starter genres like Autocross and Drag and Winding and full-fledged circuit racers running in the professional leagues, the class couldn’t be a better-tasting callaloo of cars and drivers.

Following a practice session, competition started with Time attack where drivers get 5 laps to prove who can be the fastest at single laps. The honours in SS1/SS2 combined, went to the green 1.8 Civic of budding circuit driver Heymant Singh son of legendary circuit driver Sylvan Singh and brother to Ravi Singh.The SS3 fastest lap time was set by the Mazda Miata of Chris Kadahar while the SS4 gauntlet was thrown in and set by the ever reliable and fast Evo V of Alister Rahamut. Perhaps the best Circuit Race battle of the day was in SS3/SS4 Race 2, which was punctuated by intermittent showers and cool, turbo-friendly gusts. An exciting SS4 tussle between veteran Clive Sugden in his Subaru STI and the increasingly more experienced and talented Kristian ‘BoodooStig’ Boodoosingh in his Total-sponsored FD2 Civic Type R was brewing. The fight for position lasted for over five laps as they traded places twice per lap without trading paint, cleanly passing each other with thrilling braking duels in the chase for the fastest cornering lines and outright straight-line power. Meanwhile at the head of the pack with a comfortable lead that was rapidly diminishing near the race’s end, Allister Rahamut in his Maxxis-sponsored Evo V hung on secure top honours in the SS3/SS4 combined race. In the SS1/SS2 combined races, Liqui Moly-sponsored Neil Gopeesingh was the man to watch as he hustled his way through the field against the likes of Anil Mack, Uttam Jogie and Rajendra Singh. The battles in the middle and at the back of the pack were also exciting to watch, as the fields are typically filled with all sorts of tuned street machinery– including a certain bovine Skyline that decided to take a grassy detour that ended up stopping the field. As with other racing meets, safety was a top priority with marshals, an ambulance and a technical inspection procedure in effect. This meet’s format included a three-hour combined class practice session with 38 cars of all different classes taking to the track in groups of six cars. A few rookies also got the chance to learn the secrets of the circuit with tutoring from experienced drivers such as Steven Hosein, Brandon Steele and Kristian ‘BoodooStig’ Boodoosingh. Included in the mix were five Pro Circuit Cars and drivers who were out to get in valuable seat time. Five-lap time attack sessions were next, followed by four combined-class circuit races that lasted for eight challenging laps. This meet’s competition was also enhanced by a time-saving upgrade in the form of transponders for all competing cars, enabling automatic tabulation of the results and top times via a MyLaps-based system. Users browsing this forum: No registered users and 8 guests