I now do the seasonal event to win the gtr and gold was 1 min:42 secs.000 millisecs

I ran 1min:42 secs. 721 milliseconds ...we I rel coase I didn't even bother to attempt it a second time cus I rel mash out around those corners but I should of taken of the traction
Top

i din know it out, i'll give it a try later tonight...
Top

It easy though just don't over push
Top

i have about 6 seasonal events backed up to do

I did it with traction on 3 and ABS 4.......those were the final settings that brought the time down and comfortably got the gold
Last edited by 4everstock on November 21st, 2011, 6:53 pm, edited 1 time in total.
Top

.....and Shivam, the white Super Touring FTO popped up in my used car lot yesterday......so I am one step closer to having all now
Top

Rensh wrote:I havent been on GT5 in a long while

Does this mean Forza 4 is that much better than GT5??

Or you just got bored of GT5 and Forza is just something new and different to play?

Hmm - I know it's a GT5 thread, but I think you're one of the few GT5 aficionados who can give an impartial comparison between the 2 simulators.

You're correct, got a lil bored with GT5, and I had the oppurtunity to get a xbox (free) lol, so I just bought Forza4. They are both great games.. they each have their flaws. If possible, I'd say get both lol. I ain't no game-reviewer, but I'll try. We all know how gt5 is, so here's some stuff I like about Forza4:

What I always loved about Forza is the customization of a car. It's basically limitless, with all the different paint jobs that talented users create, and the wide selection of rims and body kits.

There is drivetrain swaps, engine swaps, and aspiration conversions. For example, you buy a Silvia S15... you can turn it AWD, slap in a RB26 DETT from a R34, or the engine from the R35, or a V6... then you can twin turbo, single turbo, centrifugal supercharge or corkscrew supercharge.

Can't say that's not cool! Another example... can you say.. LFA engine in a Lexus ISF?

The engine tones are great too, even though kinda noisy at times in some cars.. and there is a lack of hearing the 'boost building up' in a turbo car. But the blow off valves on point.

Online is madness in a open room, dirty driving and chaos. But once you find a privately made room, it's pretty cool and clean. It's definitely faster to connect online in Forza than GT5 for public rooms.

I only wish I had you guys to play Forza with meh lol.

I'll get some pics just now.

whats your live ID? mine is ScientistDCA

what type of wheel i should buy for gt5 and whats the price so?
Top

the g27 comes with clucth and shifter

there are other diffrences but those are the major ones
Top

That's a pretty decent price, as it's $120 on Amazon. If you factor in shipping and duties/vat, Radioshack's price actually works out to less than if you were to bring it in on your own.

Best wheel is the G27, but it's much more expensive. If you have the $$ get this (I believe Raptor has them for sale). If you're on a budget, the DFGT is a great wheel. Apart from the differences Madcrix mentioned, the build quality of it is slightly lower than the G27. But for the price, it's an excellent wheel.
Top

i personally use the driving force
Top

Same here, and I'm very happy with it. It's one of my best purchases this year LOL.
Top

the only lil issue i din take into consideration when buying a wheel is where im going to mount it. in my mind i was like " i go mount it on any ole table or sum" but the G27 packs a punch and will twist you up all how if not mounted properly.

this is the contraption im using now Fellas when could we get another tuner lobby going with some serious races ??

Anyone wanna organize a date and time most tuners could fall in?
Top

This is my set-up with the DFGT (Driving Force GT): 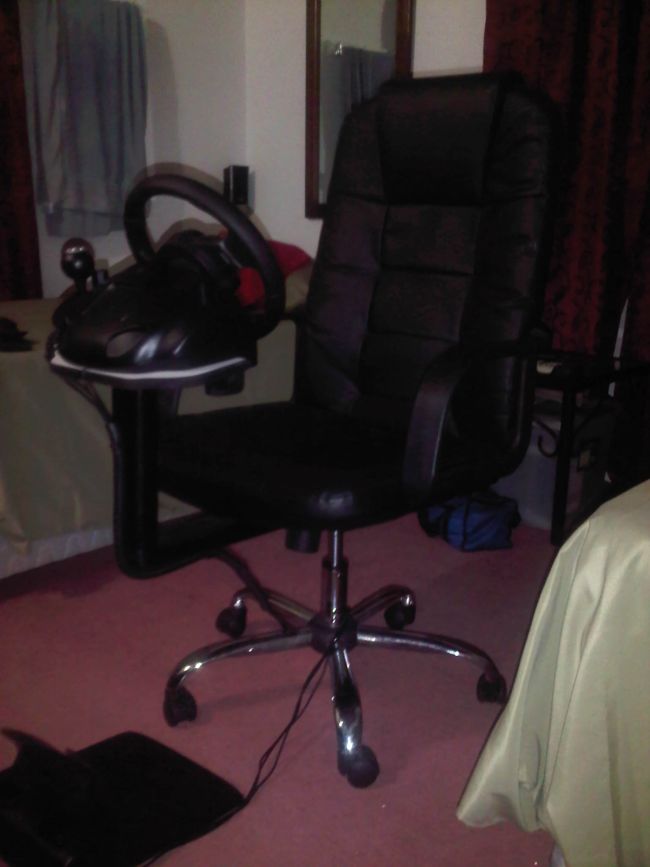 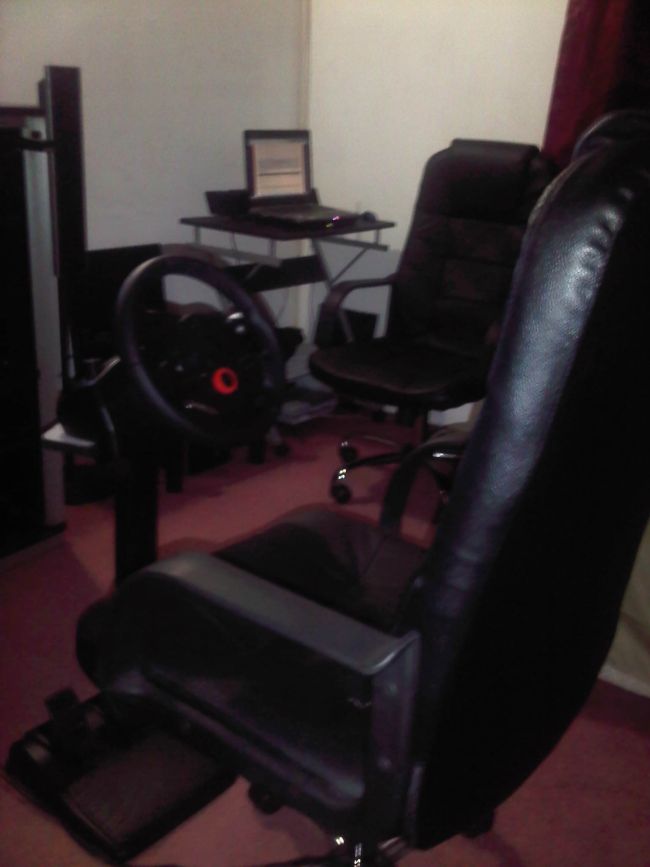 mobile, easy to move around and out of the way, stays put when it needs to ......and the chair is still functional
Top

^^^ some seasonal events payout well. There's other ways within the career mode but I dont know them offhand

with regards to the tuner sweat, i should be free on Fridays.

nice set up there 4everstock.
Top

mine was fashioned around one of those white plastic chairs

New time trials are up, and the OCD is updated. A time trial with the X2010

hobbes i feel i go hadda come and take some measeurments or make a borrow of the fabrication the man do. i can do it myself home i jsut need the template
Top

aite we sweating after a month long break TONIGHT fellars

10pm PROMTPLY.. some "ole" ppl go say lawd i have work tom fellars, or a certain man go baul he hadda go call he girl to put her to bed around 1 or so lol..

we gonna try a new thing as well. we will be racing cars in PP point of 50's

confirmed for tonight already is calvin, devi and myself. i am sure STI leo will fall in. Rensh make a pass throguh as well nah

we are running 450 500 550 600 650 and 700
tonight. the change is, you can drive a car as long as you do not change the PP points to conform for the race. you are ONLY allowed to add or remove parts from the car. your PP must remain at 100%. If we are running a 550 race and your car is 541, then you run 541.
there are alot of forums explaing the reasoninjg behind this so google it or when you comin gon tonight we can explain it to you in the lobby.
Top

Might not have been able to fall in anyway, as all of a sudden last nite I got major problems logging in to PSN.

Signed in the nite before with no problems, but last nite I could not sign in regardless of what I tried

Rebooting my PS3, router and modem made no difference.

Anyone else having similar issues? Saw this thread http://www.trinituner.com/v3/forums/viewtopic.php?f=4&t=410717 but no one else besides the OP seems to have the problem.

BTW, I see there's a new European Hot Hatch seasonal, so that should be fun as well (as long as I can get onto PSN