*The Ministry of Works wants to build two (2) highways from Point Fortin. One goes from Point to Mon Desir, along the Mosquito Creek to San Fernando. We are not challenging this highway. This one is a bonus for the people of deep South who suffered for too long.

*The other one is a 6 foot high, 9.1 mile embankment through the Oropuche Basin, passing through thirteen communities from Mon Desir to Debe. This one will create massive dislocation, flooding, and alienate fertile lands.

* It will generate metropolitan sprawl in peaceful, well-knit, empowered communities. We are against this madness. This is highway robbery, make-work for contractors - make work to build it and make work to clean up when the floods hit.


* We want the repair and widening of roads in this area, as well as the use of outlying secondary roads to create connectivity in this area.

You seem upset. Is your issue that the persons relocated not be compensated?
Top

RELOCATION AND COMPENSATION IS NOT AN OPTION FOR US!!! RE-ROUTE the Mon Desir to Deb segment
We've had is no consultation on this matter...Mr Warner is headstrung on this route but there are alternatives which are more cost effective and will disrupt fewer communities
Imagine destroying 400 acres of fertile soil - in some places the geo fertility is 15 feet deep - at a time when they speak of food security and feeding a nation!
Top

If you found out that current highways involved similar disruptions, would you still drive on it?

If you found out that you house now sits on land that had some usefulness for someone, sometime before, are you will to move?

I am tired of these myopic people would want Trinidad to stay in 1962.
Top

wagonrunner
TriniTuner 24-7
Posts: 13181
Joined: May 18th, 2004, 9:38 am
Location: Distancing myself from those who want to raid the barn but eh want to plant the corn.
Contact:
Contact wagonrunner
Website WLM

aye. shortest distance is a straight line, and you really feel they care?
more efficient = less to thief, so get yuh letter, and toss your carcass.
Top

Highway Re-Route wrote:We've had is no consultation on this matter...

As part of the Environmental Impact Assessment for the project, consultations were held with all stakeholders. The route was adjusted based on feedback from these consultations.

What you should go and study is how Eduard Moodey who was supposedly fighting for the people is now NIDCO's community liaison officer.
Top

are these places in Trinidad??
Top

Highway Re-Route wrote:RELOCATION AND COMPENSATION IS NOT AN OPTION FOR US!!! RE-ROUTE the Mon Desir to Deb segment
We've had is no consultation on this matter...Mr Warner is headstrung on this route but there are alternatives which are more cost effective and will disrupt fewer communities
Imagine destroying 400 acres of fertile soil - in some places the geo fertility is 15 feet deep - at a time when they speak of food security and feeding a nation!

you sounding like you get blank for the 5million yuh ask for to move...
Top

dreamed something like this mid last year and always knew it was going to happen....reaching to pt fortin is a pain as it is now.
Top

Doh say new highway!! Thank you lord father above!! I thought they changed their minds!!

Habit7 wrote:If you found out that current highways involved similar disruptions, would you still drive on it?

If you found out that you house now sits on land that had some usefulness for someone, sometime before, are you will to move?

I am tired of these myopic people would want Trinidad to stay in 1962.

Where these idiots come out from?

It's the price for progress, just remember 25 babies were born on new years day alone.
Top

but srs doh we have a pitch lake and several quarries with materials ,we have no excuses
Top

Mark! wrote:are these places in Trinidad??

Need to see where my house lies in this scheme of things.
Top

That highway is much welcomed.
Top

why de fack they dont fix the flooding problem on the creek?
Top

anyone here has the route from start to finish... ?
Top

Highway Re-Route wrote:The Case :
This highway will cost approx 7.6 Billion Dollars!!!
It involves : Destruction of over 300 homes, 400 acres of prime argricultural lands, the DEBE Market, schools, places of worship, 61 oil wells to be capped.....No clue about compensation or relocation...do they really think we'll just give up our lands that easily?
I am no architect but I am pretty certain that they can come up with a new route - one which does not involve wasting so much dam money!
Get serious Jack...you cannot disrupt these communities already established without major societal/ecological/environmental consequences.
Is anyone here in support of this make-work project tailored for bustle, prestige and deal, rather than ital development?

I thought the Gov't would have buy out 'Du More Enterprises' in Otaheite an start the Point Fortin Highway from there..there's plenty forested areas in the back there..that would be a good point to start from..!
Top

Pfft.... if people get helicopter taxi service they will complain. From working at ALNG for a while, I can vouch for the need for this highway. As much as i am a proponent of driving safely, if you drive too slow on the road to point, and not defend your space, you will get serious and continuous bad drive/ reckless overtaking... around corners too. Guapo stretch could see 20 cars/ trucks overtaking you if you are doing the sped limit.
Top

well hard luck dan... i was late for work
Top

Greypatch wrote:anyone here has the route from start to finish... ?

The red line indicates the Debe to Mon Desir route which is the first phase, the the green line represents the second phase...

All i can imagine is the amount of illegal racing going to happen on these highways!
Top

turbosingh wrote:All i can imagine is the amount of illegal racing going to happen on these highways!

well u dont have to imagine

Nice. What do the letters represent?
Top

OP seems like you living in a dream land where roads does get built in the sky... if the founders of our country used any kind of foresight in design of this country we would not be in this situation, think of it as a better way in the future...
Top


Government has been told that the majority of people living in Debe, south Trinidad affected by the proposed route of the San Fernando to Point Fortin Highway, are not supporting the project.
At a public consultation on the highway project, at the Debe High School yesterday, Edward Moodie, president of the Debe/San Francique Action Committee, said, "60 per cent of the people living in the area do not want the highway, while 40 per cent would like to know what the compensation package would be before they agree to the highway."
The consultation was attended by Works and Transport Minister Jack Warner and Local Government Minister Chandresh Sharma.
Moodie called for a review of the proposals as submitted by Ronald Nurse of Trintoplan Consultants Limited, an engineering consultancy firm.
Moodie was also concerned about the absence at the meeting of a government Member of Parliament who promised to have the highway scrapped, before the People's Partnership took power.
Moodie said, "He told members of the community that once he got into power the plan would be scrapped."
Member of Parliament for Oropouche East Dr Roodal Moonilal did not attend the meeting and Sharma left before the open forum.
Leela Deonarine of South Oropouche said she was disappointed with both Sharma and Warner because they too had promised to have the plan scrapped.
Warner had no comment to make on Deonarine's statement.
Speaking about an unnamed government Member of Parliament, Deonarine said, "He even engaged a lawyer to look into the matter so that we could sink the Peoples National Movement (PNM), and now it is the same thing all over."
Rita Rambajan of South Oropouche community said the plan as presented did not take into account the social issues such as relocation and acquisition.
"The highway will pass through my living room where I have been living for the past 50 years," she said.
Sham Mohammed said the consultation was a sham because, "nothing will change because they have already drawn the plans."
Warner announced that an office will be set up in Debe to deal with the problems and the contentious route will be put on the Internet so that those affected would be able to see exactly where the highway will be passing.
Warner said, "This project will cost six billion dollars and it will be the biggest project the PP Government will be undertaking in the next four years."
The proposed highway will begin at Golconda and will pass through the villages of Debe, San Francique,Siparia, Fyzabad, La Brea, Vance River and end at the Dunlop Roundabout, Point Fortin. 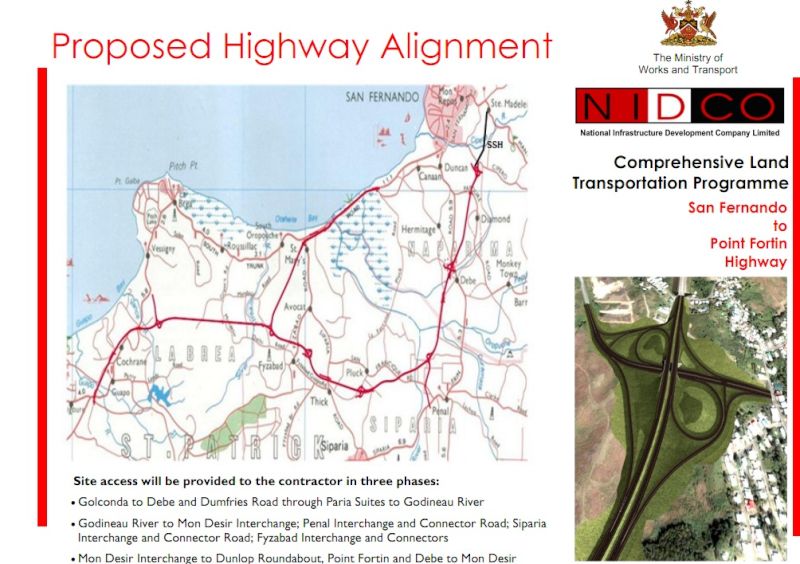 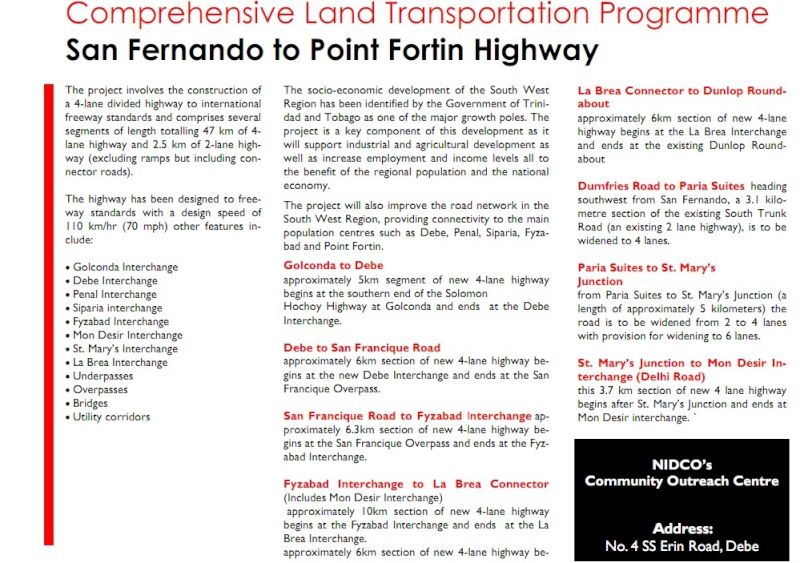 thanks xtech yuh mash up the dance there
Top