Wallerfield to be revived for CMRC Regional Racing

Wallerfield to be revived for CMRC Regional Racing 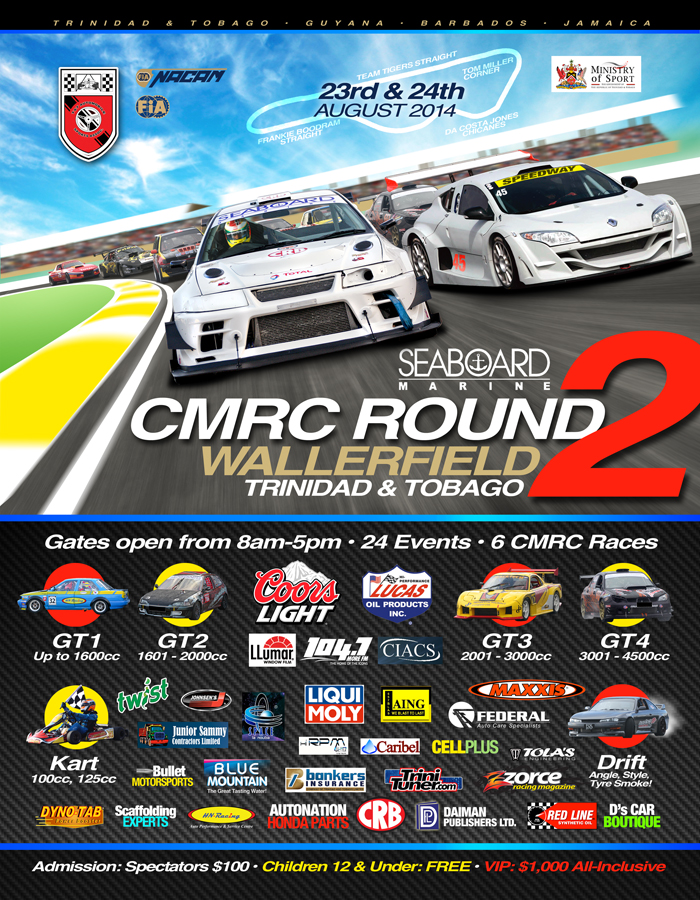 The Trinidad & Tobago Automobile Sport Association (TTASA) has acquired use of the circuit track at Wallerfield to host a leg of the CMRC regional circuit racing event here on August 24th 2014.

Current TTASA President Mr. Robert Amar has confirmed that the association’s members are working feverishly to have the facility ready in time for the upcoming event. He said that"this event MUST take place". Recently a new body, the Caribbean Motor Racing Association (CMRA) was formed to govern the CMRC. The CMRA governing body consists of regional representatives– Ray Rahaman of Guyana, Sean Maloney of Barbados, Silbourne Clarke of Jamaica (Clarke is a Trustee of TTASA) and Robert Amar representing Trinidad and Tobago (Amar is the current President of TTASA). Each representative is mandated with the task of carrying out a leg of the CMRC in their respective country during each championship year. The CMRC of course runs with a standardized set of racing groups, rules and regulations for competition.

In 2014 the CMRC, in its current format, was kicked off at the newly renovated Bushy Park Circuit in Barbados. Officially, Top Gear Festival Barbados, the first of the series in the Western Hemisphere, was the inaugural event of the Bajan Formula 3 circuit. The first regional racing event on the new circuit was leg one of the 2014 CMRC Championship, held on July 6th 2014. The second leg of the CMRC circuit event is slated for Trinidad& Tobago at the Wallerfield Raceway on August 24th 2014.Guyana’s South Dakota Raceway will host the third leg in November 2014 and the final leg of the 2014 CMRC Championship will be held at Dover Raceway in Jamaica in February 2015. If successful, this new, more complete format may carry on for subsequent championships.

Competitors from these four regional countries will compete in each event. This will be facilitated by sponsorship from Seaboard Marine Caribbean Ltd, who have generously offered to ship up to 12 cars from each country (up to 6 from Group 2 and up to 6 from Group 4, respectively) for free, for the duration of the 2014 CMRC Championship.

At the first leg in Barbados, T&T was represented by Kristian Boodoosingh, Haresh Nanan, Ruddy "Priest" Beekee and Daryl Ali. Robert Amar said he hoped that the top racers from each country will be here with their cars in T&T, come August 24th.

TTASA Vice-President Jameer Ali along with the association's President Robert Amar have both been key in securing the use of Wallerfield through negotiations with the Ministries of Trade and Tourism and with the Director of Sport Mr. Dave Bobb at the Ministry of Sport. Ali said there were plans with these very stakeholders and that a permanent location is already on the table and will begin soon. However, in order to meet the regional mandate of the CMRC, of which Trinidad and Tobago are a part, the T&T Motorsport Governing body, TTASA, had to secure a temporary solution, and Wallerfield was the natural choice. Unfortunately the old circuit track at Wallerfield, last used in 2006, has since been demolished and reconfigured. For the most part, only certain sections still remain identifiable. In light of this, major work remains ongoing over the next six weeks to have the track prepared for the Group 4 cars–the CMRC’s fastest class. What was previously the main straightaway now features dual pavements with box drains, part of the infrastructure that was being built for the e-Teck Tamana InTech Park at Wallerfield. In the interest of safety and ease of useable reconfiguration, this will become the new Pit Area. The old track’s Pit Area has been cleared of any structures and will now become the new straightaway. This now adds new twists and kinks to the track and should make it interesting for the drivers. The rest of the track should remain similar to the old Wallerfield Circuit, making it easier to prepare for the August deadline, and preserve most of the nostalgia of seeing motor racing on the old layout again. Both Ali and Amar agreed that preparation for this deadline will be no small feat given the current condition of the area, but heavy machinery has been deployed on the site since June 24th. They are confident that they will finish ahead of schedule. Amar said his association had no funds, but that they were working with whatever resources they could access to have this CMRC meet become a reality as it would mean a return for T&T to the fold of professional Caribbean motor racing. The President and VP said most of the work being done currently is being leveraged on their own personal credit.

The temporary facility when completed in August will be able to accommodate up to 20,000 patrons, complete with ample secured parking and large spectator and VIP areas. All-inclusive VIP ticket prices are expected to be TT$1,000. Amar said if they could get 5,000 patrons at this event they would be able to cover most of the costs. They are also in the process of confirming additional racecars from Puerto Rico and the US.Both countries have top-level contenders.

The negotiated agreement to use Wallerfield only covers the August 24th motor racing event thus far. However, negotiations may take place after to have some conditional use while the new permanent facility is being worked on. Hopefully the Return of Wallerfield. Track Pics Inside!

Saw this on THE NEW TRINIDAD AND TOBAGO AUTOMOBILE SPORTS ASSOCIATION page on Facebook.

Is this for real ?
Havent seen or heard anything much on this.. and its next month!

heard about this last week from a good source
Top

Where did wallerfield go?
Top

heard it was being sorted out, and was wondering how come all the big guns coming back out and testing out in camden
Top

It's a one time even. Continuation to the event that took place in Barbados last weekend
Top

So if you didn't take part in Barbados you are automatically out of this one?
Top

TriniGT wrote:So if you didn't take part in Barbados you are automatically out of this one?

don't have details, narend just told me its the next leg of a regional event
Top

Graphic lame. so no care
Top

GORTT just opened Tamana Park last week. How certain are they that this will happen in Wallerfield??
Top

If the cars that took part in Barbados are going to be there so will I!
Top

Halfbreed07 wrote:the fact that you joined tuner to ask this bothers me slightly

Damn, here i thought the government was gonna be true to their word and give we back waller field.............those devils
Top

From what I heard on the ground, one member explained-: The intention after the 2 day regional event is to sit or remain on the premises and continue to use it. What about E-TECH.

So let me get this straight.

TTASA occupied Wallers for 40 years negotiated with the Government out of their squatters rights poorly, accepted financial funds to vacate the property, and now want to squat and take it again, now with a staggering cost attached.

PHDs, for all involved.
Top

so how does one get to attend these meetings
Top

Aaron 2NR wrote:so how does one get to attend these meetings

das a question for link.

He knows TTASA constitution like its the bible
Top

So how do you sign up for membership
Top

Aaron 2NR wrote:So how do you sign up for membership

goodluck with that.
Top