If businessman Leon Paria were alive today, he would have likely been the 62-year-old owner of a piece of automotive history, worth more than $10 million.
Instead, he became a murder statistic.
Paria left home one morning in October of 2002, and never brought back the ingredients for the Sunday meal planned with his wife and two infant daughters.

His Toyota Rav 4 was found abandoned in Sangre Grande the next day.

And his remains were found in the bushes outside of the town, the next month.

Paria died in a year when kidnapping for ransom became a lucrative enterprise in Trinidad.

It was also the year when the murder count reached a then- outrageously high 171.

If we only knew how much worse it would get.

As with many of the killings happening now, Paria's death was never solved, despite the best efforts of widowed wife Carol Paria.

For years she tried to get the homicide bureau to continue digging for information leading to an arrest, indictment, prosecution, justice.

The homicide “unsolved” rate in troubled Trinidad and Tobago is about nine out of ten.

Sixteen years later, Carol continues to operate the business she started with her husband, an auto air-conditioning service shop in San Fernando.

Their children have grown up and made their own lives.

She still maintains at the family home in Santa Cruz from which Leon Paria left that day, to come back in a coffin six weeks later.
Top
Advertisement

*$kїđž!™ wrote:F businessman Leon Paria were alive today, he would have likely been the 62-year-old owner of a piece of automotive history, worth more than $10 million.
Instead, he became a murder statistic.
Paria left home one morning in October of 2002, and never brought back the ingredients for the Sunday meal planned with his wife and two infant daughters.

I think you may have missed part of the story out...
Top

what part of tht is worth 10mil?
Top

Ent u know puppets have no brains...
Top

So, was the murder related to the $M car? How much is the rooster worth?
Top

York wrote:So, was the murder related to the $M car? How much is the rooster worth?

York wrote:So, was the murder related to the $M car? How much is the rooster worth?

sad...i feel for her but finding the killer/s will not bring back her husband. There are many others who suffer the same plight but at least she has the family business and whatever wealth he had accrued in the business to keep on living, something others don't have. Ppl have to leave their schooling and get a job to help mind their brothers and sisters.

It's better they doh find the killers yes, cause she will have to pay taxes to feed, clothe and rehabilitate them in prison, if they doh get hang.

Chill Out, always wondered what happened to that business. They had a branch by the Royal Road traffic light. The sign still there I think yes.
Top

Video of the restoration

Since the day of that 2002 murder, one of Leon Paria's prized possessions, a 1973 model Porsche 911 Carrera RS had been parked in the garage of his home - a piece of German engineering defying the island's tropical weather.

This car is now famous in the world of high performance automobile collectors and enthusiasts.

In 1978, that Porsche was purchased in England by a Trinidadian and shipped to the island.

And according to the certified copy, PY-5363 was sold in 1989 and ended up in Paria's hands four years later.

Carol Paria recalled when it was purchased by her husband.

“He just loved buying these vehicles. It was his passion. And he liked special cars (he also had a Pontiac Trans Am and Benz 380 SEL). I am not sure how he found the Porsche. He was not one to discuss things like this with me. I only knew of him buying the car after the fact”.

Paria recalled that when her husband acquired the Porsche, it was not functioning.

“He said it was in some tall grass in Trincity. He did a lot of work to restore it, dash board, interior, painting, and mechanical things”.

And then it was back on the road.

Carol remembers the car winning “best of show” at a car show in Chaguanas.

How much Paria paid for the car, his wife never knew. It wasn't something he discussed.

But one day, while heading along the highway, the engine began failing and Leon Paria had to nurse the Porsche home. He never got around to doing the repairs. There was no Porsche sales company or technical support in the Caribbean at the time. So whatever needed fixing was out of Paria's reach. He never drove it again.

And in the garage it remained. Sometime later, someone killed Paria.

Over the years, Carol Paria would keep in touch with the police officers who were supposedly investigating the murder case.

“Up to five years after Leon died, I kept in contact, asking what was the latest, what did they find out. They always had a story, always had an excuse. So I stopped calling. They were not interested”, she said.

Carol Paria said she got many good offers for the Porsche. But she knew it was a collector's item and worth a lot more money. So when an American came calling in 2016, persistent and offering much, much more, the Parias decided to sell.

And one day, one of the most potent memories of Leon Paria was towed away from the family home.

The vehicle was sent off to Florida, and is now back in the UK. 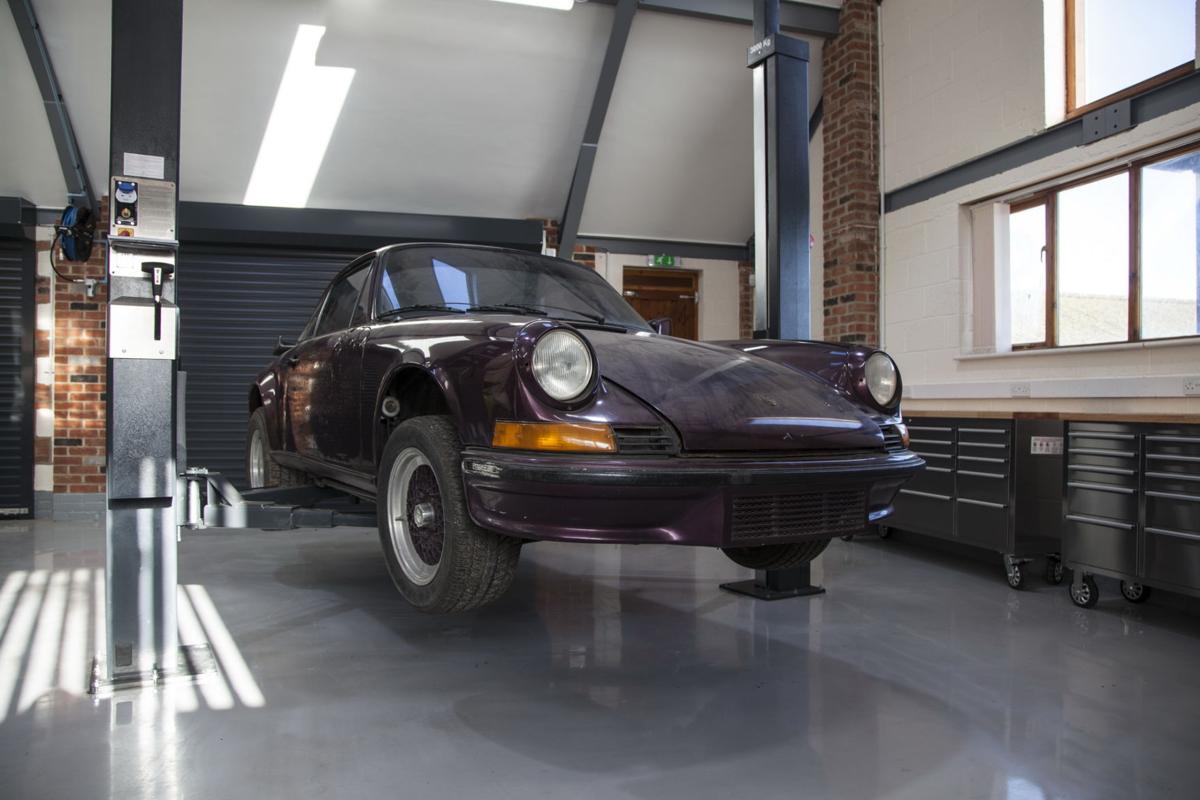 But Carol Paria says she will never forget. I think of him almost every day, because this was such a huge loss, of course. This (article) may be a reminder to people. I want people to remember what was taken from us. If he was alive…things would have been much different”.

Even the Parias underestimated the pedigree of the Porsche. The vehicle is now being celebrated in the United Kingdom, and the subject of a story on BBC 's Top Gear website.

Only 16 'Royal Purple' RS 2.7 Touring Carreras were ever built, and only seven of those were right-hand-drive.

Paria's car was the very last one to be produced.

Untouched, its value is upwards of 500,000 pounds. After restoration, it is expected to fetch more than one million pounds.

According to the experts, despite having received a number of 1980's style cosmetic modifications over its life in Trinidad, including the rear wing, alloy wheels, tinted windows and aftermarket seats and steering wheel, it was found to be an original survivor by Autofarm, the UK-based Porsche experting now restoring the vehicle.

“Peel off these latter day accoutrements and Autofarm has discovered a 'matching numbers' RS 2.7 with the added kudos of being the last RHD to leave the factory.

With so many RS ending up in competition, cars with a documented history and retaining their core originality are extremely rare. And this one has also thankfully retained the unique 'homologation' technical features of the very last of the RS series, the 'short' trailing arms for what became the Turbo suspension geometry, and the stronger Silumin crankcase, the material used on the 1974 3.0 RS and RSR's.

“The RS 2.7 is now highly revered by collectors and enthusiasts,” said Autofarm's Josh Sadler who freighted the Porsche from Florida to the UK.

“A good contact Rikard Asbjornsen in the US alerted us to this car. As is often the case, especially given the circumstances of the former owner's demise, the family was understandably cautious about enquiries. They actually started to cover the car up with old furniture to conceal it and a number of dogs patrolled the garden. Eventually Rikard was able to agree to a deal with the daughter and got the car back to Florida and I acquired it from him there."

The condition of the car surprised Sadler.

“The fuel tank was completely dry and I've never seen that. However, it remains a very good car and very rare in purple, though it has subsequently received a later metallic hue…The modifications we now view as tasteless, but they do tell the tale of the car. It has led a remarkable life and the murder of its owner meant it was left undisturbed for a considerable time. I'm sure it will be worth a lot more if restored but cars are all about their owners and I've fallen for the story of this one” he said.

Only this year did the restoration begin on the Porsche, which has been dubbed The Trinidad RS. Every detail of the process is being documented and posted on YouTube by Autofarm, which intends to return the vehicle to the road.

Note: Richard Charan is a writer and Multimedia Editor with CCN. You can contact him at richard.charan@trinidadexpress.com
Top

i am so gonna enjoy watching this restoration
Top

Widow better watch she back, with them kinda figures being bandied about, she could be a target
Top