Expect to be paying more for tobacco and alcohol products from September 30 when the 2016-2017 budget is presented.

The Finance Ministry says the line minister, Colm Imbert, will read the budget at 1.30 pm in Parliament and it’s going to be an austerity budget in light of the country's declining revenues from the energy sector which Prime Minister Dr Keith Rowley said have fallen by as much as 70 per cent. The budget has to be in place by the end of October for start of the new financial year. Imbert gave the date in an announcement in Parliament yesterday.

Rowley has already hinted of a smaller budget than last year’s $63 billion budget, below $60 billion, but one including more taxes. There has been speculation by some that the 2017 package will be a “tough” budget on citizen’s pockets following some Government hints of revenue challenges.

The last budget had included cost-increase items, including expansion of VAT on items and a fuel hike. Another fuel hike came in the mid-year review in April.

In his address to the nation last Sunday, Rowley told the country that despite the falling revenues adjustments have been minimal. Government has boasted that there have been no major retrenchments and it had cut back on its own expenditure with less foreign travel and expenditure in ministries had been reduced across the board by seven per cent.

And for the first time it was set up the Government dipped into the heritage and Stabilisation Fund. taking US$375 million out of the fund to assist with the running of the economy, including payment of salaries.

Imbert is also expected to give details on the tax amnesty which ends tomorrow and how much revenue Government was able to raise from the amnesty. He had estimated $500 million but our sources tell us that it could be significantly less.

Changes to the Value Added Tax system which saw a drop from 15 per cent to 12.5 per cent and the increase in VAT registration from $360,000 to $500,000 will also be addressed. The minister had hoped to increase revenue collections through this measure to $12.4 billion up from the 2015 estimates of $6.7 billion.

What to expect
Among the measures expected in the 2016-2017 fiscal package are the online shopping tax which the minister had first hinted at in the 2016 budget.

Mechanisms for implementation of the property tax have been worked out, sources said, and this measure, which was announced in the previous budget, would be implemented from January 1, 2017.

Increases in taxes on casinos and gaming machines are also expected to take effect in the budget and consumers of alcohol and tobacco can also expect to pay more for what have been described as “luxury items.”

Well-placed sources told the T&T Guardian that there would be a further reduction in the fuel subsidy. In the last budget the price of super gasoline went to $3.11 up from the previous $2.70 and there was also an increase in the price of diesel from $1.50 to $1.72 a litre.

Concerned about the decline in oil production sources tell us that Government would be seeking to encourage upstream production. Steps will also be announced as Government moves to ensure that it meets an announced commitment for ten per cent of energy to be from renewable sources by 2021.

Our sources say there is likely to be a review of energy tax incentive measures and a reduction in corporation taxes. There will be no changes to personal income taxes.

Increases in allocations to the Ministries of National Security and Health are on the cards since these have been deemed as the two most critical areas at this time, sources said.

The budget, according to our sources, will be predicated on an oil price of US$40 or US$45 a barrel and Government is expected to tell the country that it had significantly reduced the budget deficit.

Tax the guts out of the citizens. That solves all our problems
Top

if they dont waste money of overpriced contracts they would not have to Tax people so much.
Top

dont anybody dare complain now cause u all voted for dat .......

Once they don't raise premium
Top

hong kong phooey wrote:if they dont waste money of overpriced contracts they would not have to Tax people so much.

Financiers have to get back their payment they spent on election campaign. An unfortunate reality that we citizens must fund. It is one of the main things that makes Trump popular in that he spends money from his pocket or donations from citizens.

Things in this country are about to go up very very high the property tax coming this won't be nice, Trinidad is heading down a deep and dark latrine.
Top

Phew... almost got trolled by that article. Almost read the whole thing. Stopped reading at 'and a reduction in corporation taxes'

Im pretty sure op got this article from a local troll website.
Top

^ wa? he got it from the guardian

HSA wrote:Great is the pnm....

And together we shall prevail.
Top

EFFECTIC DESIGNS wrote:^ wa? he got it from the guardian

Then there is only one explanation. And it is elementary dear watson. The guardian newspaper.. is trolling lol
Top

Do you guys think this country will ever recover from the depths of the latrine that it is currently in?
Top

Idk ED what do you think?
Top

and if unc come back, gonna be bobol, and saying dey bess ting for building community centres and doing do economic diversifcation.
Top 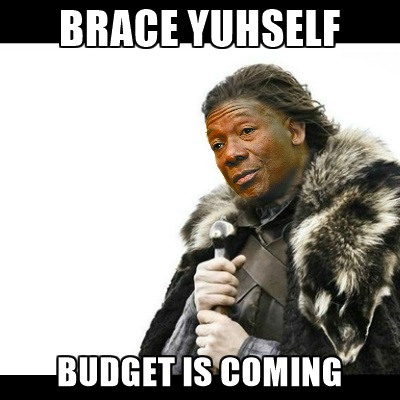 EFFECTIC DESIGNS wrote:Do you guys think this country will ever recover from the depths of the latrine that it is currently in?

no, since it only the poor people who doh plan for anything that kethcing tail.
Top

Where are the PNM stalwarts ?
Top

daas wrote:Idk ED what do you think?

bring them taxes sept 30th....goin to plant up some eddoes...i could weather out ah 3 years...boil and fry eddoes with some saltfish and eddoes punch to drink...ah gettin fat under this pnm...god bless them
Top

Time to live off the land. .

One again the Government spreads cheeks to ram Rooster in arse.
Top

and if unc come back, gonna be bobol, and saying dey bess ting for building community centres and doing do economic diversifcation.

You not the same person that was making 3 - 4 threads a day to say you voted PNM?
Top
Advertisement
Post Reply
176 posts