A POLICE bulletin seeking the public's help in finding a missing 21 year old Couva woman led to her safe return on Tuesday.

Nickey Lalla was found in Caroni, and returned to her family with the assistance of police officers.

Her husband, Ashook Nagessar, 43, said he was relieved that she had been found.

“I am overjoyed she is back home. Yesterday (Tuesday) I took up her picture and prayed on it. Within a few hours I was able to get her back”.

Lalla left the home she shared with Nagessar at Hillview Lane, Lower Couva Road, on December 29.

He said that evening around 7 p.m. he walked out of the house street to speak to someone, and when he (Nagessar) returned home his wife could not be found.

Nagessar said he, Lalla's family, and friends, looked “everywhere” for her.

He made a missing persons' report to the Gran Couva Police Station.

Ashook Nagessar husband of, Nickey Lalla, seen in (background) at her mother's home in Couva on Wednesday. Lalla went missing on December 29, and returned on Tuesday. -Photo: TREVOR WATSON

The police issued a bulletin to the media on Tuesday with her picture attached.

“We went to certain places around the area looking for her, but couldn't find her at all. When people saw it on the news, someone called her mother and told Nickey was in Caroni. The person gave us directions to the house and the Caroni police helped to take her out of the place”, said Nagessar.

Nagessar said that was the third time that she had gone missing in about two years.

“We were going to get married in December. We didn't set a date as yet. And then this happened”, said Nagessar.

When the Express visited Lalla at her mother's home at Lower Couva Road she spoke little, and said that she was doing “good”.

Her mother, Samira Lalla, said: “I am glad that she is back home. We are happy that she is okay”.

how did she leave ?? against her will??

where in caroni was she staying ? was she held against her will??

was she staying in a hotel / bar establishment or in a poor apartment complex ???
Top 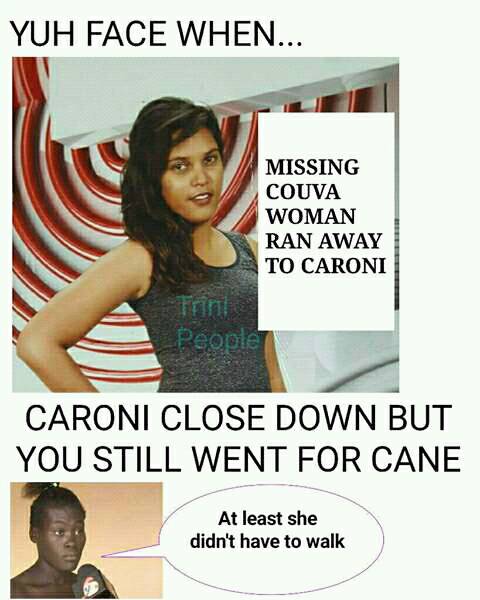 Jeez...that Ashook chap has white rum written all over his face...looks like he was abused and abuses
Top

Mr. Paul needs to return that jackass of the decade award he just won. We got ourselves a new champ here
Top

whoever take that picture is a boss photographer, ketch the essence of the whole story, woman aint give a damn and playing with she foot
Top

Charge she mc for wasting police time..she was by the horner man...
Top

At least we know this happens in all shapes and colors.
Top

It have real crimes being done to girls and women, and then it have this shtt...

pugboy wrote:whoever take that picture is a boss photographer, ketch the essence of the whole story, woman aint give a damn and playing with she foot

Ashook needs to file a missing persons report for his nuts.

That Nickey looks like fun ,unless you're married to her.
Top

shogun wrote:Ashook needs to file a missing persons report for his nuts.

No need to, he could take a picture of it and pray over the pic. It will come back.
Top

The article describes him as husband but they not married??
Top

786 Accounting wrote:"The person gave us directions to the house and the Caroni police helped to take her out of the place”, said Nagessar.

Why did they need police help? She get frighten and the horner man and she get lock up like dog?
Top

See, this looks a like an incident of forced marriage. But because of her age, the authorities will not lend any real assistance, cause she big and have sense in she head.

I have said before, the problem is not with underage marriage, but with forced marriages.
No one should be forced into a marriage, no matter how young, or old.
But u should be free to get married, as long as u do so with free will no matter how old. And if ur under 18, some social worker with some social skills would give guidance to determine that the person is doing so freely with no coercion.
Top

she must be so disappointed about the wedding and all
Top