There have been attacks on London Bridge, Borough Market and Vauxhall.

BBC - Armed police and ambulances were called to reports of a white van hitting several people on London Bridge 22:08 BST on Saturday.

The area and nearby railway stations were closed. Witness reports said the van mounted the pavement of the bridge.
BBC reporter Holly Jones, who was on the bridge at the time, said: "A white van driver came speeding - probably about 50mph - veered off the road into the crowds of people who were walking along the pavement.

"He swerved right round me and then hit about five or six people."

Police have said there has been "more than one" person killed on London Bridge.

British Transport Police confirmed at 23:15 that there were "a number" of casualties and said there was an "incident that possibly involved a van and a knife".

The Metropolitan Police confirmed a second armed response to nearby Borough Market where there were reports of stabbings. Police said shots have been fired.

A third police unit was sent to the Vauxhall area. 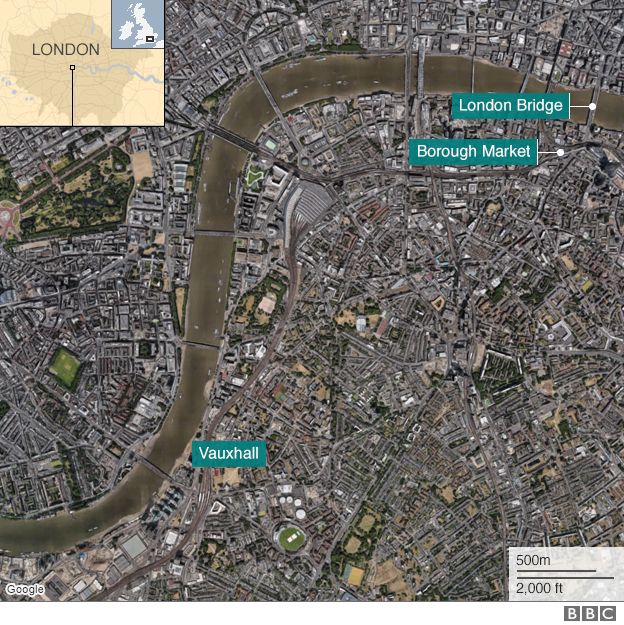 Let's play the guessing game who was involved
Top

BBC:
• Police confirm more than one fatality after a terror attack on London Bridge and Borough Market
• Reports of "multiple" casualties and walking wounded
• Speeding van veered into crowds, reports of men attacking members of public with knives
• Officers understood to be looking for three suspects who may be armed
• London Bridge railway station is closed
• Transport police say London Bridge will stay shut overnight
• Another incident in nearby Vauxhall was a stabbing and not connected to the terror attack, say police
Top

Geez. Why this happening?
Top

US-UK is at "War" with Syria, Iran, Iraq etc. Practically the entire Middle East
except Saudi Arabia - which just happens to be a dictatorship regime but has the
full support of US-UK.
Top

US-UK is at "War" with Syria, Iran, Iraq etc. Practically the entire Middle East
except Saudi Arabia - which just happens to be a dictatorship regime but has the
full support of US-UK.

True. A simple retaliation. Equality. "U kill us we kill yours" mentality.
Top

I said it before, lots lots more to come this is only the beginning.

Yes I agree fellas like Bush and Blair and them morons is the cause of all this, but we are beyond that point now and the current politicians are to blame for all what is happening here. These people who call themselves politicians, cannot even name the problem but we expect them to fix the problem?

The year is 2017 and people still believing in talking snakes and killing in the name of a god. While science is nearing the resurrection of the once extinct Woolly Mammoth using 40,000 year old frozen blood.
Top

ISIS not claiming this one
Top

US-UK is at "War" with Syria, Iran, Iraq etc. Practically the entire Middle East
except Saudi Arabia - which just happens to be a dictatorship regime but has the
full support of US-UK.

UK government needs to set up a Guantanamo and start shipping them out.
To hell with all the liberal squealing wankers.
Top

Twelve people have been arrested after the London terror attack which left 7 people dead and 48 injured.

• The arrests in Barking, east London, followed a raid at a flat belonging to one of the three attackers.

• A van hit pedestrians on London Bridge at 21:58 BST on Saturday. Three men then got out and stabbed people in nearby Borough Market.

• The attackers were shot dead by eight officers who fired 50 bullets. A member of the public was accidentally shot.

• The member of the public remains in hospital in a non-critical condition, Assistant Commissioner Mark Rowley said.

• "The situation these officers were confronted with was critical, a matter of life and death - three armed men wearing what appeared to be suicide belts," he said.

• "They had already attacked and killed members of the public and had to be stopped immediately."

• The suspected suicide vests were later found to be hoaxes.

• Thirty-six people are in hospital with a "range of injuries", he said, and 21 are in a critical condition.
Top

8 officers, 50 rounds of ammo to ensure that the 3 -pieces of crap terrorists are "neutralized" as they would like to call it.
Love it, wish our police here would open fire and neutralize all dem bandits.
Top

8 minutes these guys were down...

What are we doing wrong?.

We should import a ton of the Scotland Yard and UKPS and download their systems...and implement them.
Top

One bystander was also shot by the Police, though not fatally.
Top

When you have key head members of our police force who say " homE- micide" [
What else do you expect from. Group of Dotish ignorant police officers?

quote="Redman"]8 minutes these guys were down...

What are we doing wrong?.

We should import a ton of the Scotland Yard and UKPS and download their systems...and implement them.[/quote]
Top

And one armed citizen...willing to do what was necessary could have saved some lives here.

"This is a fire that (Western powers) themselves ignited and now has backfired on them," he told a gathering of senior officials in Tehran at a ceremony to mark the anniversary of the death of revolutionary leader Ayatollah Ruhollah Khomeini in 1989." [ AFP News Internet 5/6/17]

Very sad and disturbing situation . It is not to be condoned.

But when you use "dirty" bombs from Jet Planes and remote unmanned planes "combat drones" to kill
innocent people, babies and children and call it " collateral damage " ..

There are consequences. It is a retaliation . It is War .
Top

Two of the men who carried out Saturday night's terror attack in London have been named by police.

Scotland Yard said Pakistan-born Khuram Butt, 27, from Barking, east London was known to police and MI5 but there was no intelligence to suggest an attack.

The other attacker was Rachid Redouane, 30, from Barking, who police said claimed to be Moroccan-Libyan.

The pair and one other man were shot dead by police after killing seven people and injuring 48....http://www.bbc.com/news/uk-40165646 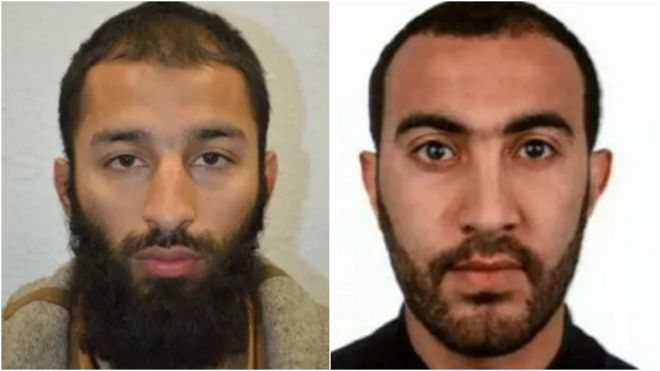 Wow, they LOOK like terrorist. These monsters need to be rounded up.
Top

Round them up and put them in a prison on the Falklands. Make an island into a Guantanamo. Feel that cold all year.
Top

They need to take out the source. Find and eradicate the cretins radicalizing these idiots.
Top

matr1x wrote:Wow, they LOOK like terrorist. These monsters need to be rounded up.

Ok, I will tell you a secret

damn...and i was planning on going to London soon....;/
it's all Blair's fault. string him up.
Top

I frequent england and it's becoming more and more like that. Knowing how many trinis are in UK, the crap continues to bother me. When is enough, enough? Those who have issue with the west need to go back to the east.
Top
Advertisement
Post Reply
72 posts