Forum rules
This forum is for discussions on Trucks and Pickups only!
DO NOT POST ADS IN HERE
WTB (Want to buy), LF (Looking for), EOI (Expression of Interest) or FS (For sale) topics etc will be deleted.
If you are looking for a part please search or post in the Auto Parts Classifieds.
Please keep all discussion professional and technical. Opinions are welcomed, however trolling, spamming and bashing will not be tolerated.
Post Reply
300 posts

well guys, this is a different kinda trucks and pickups thread...this is a blood sweat and tears epic build thread.......

narration and pics will follow along as we plan, progress, chop, cut, buy, build, and break.....

so far from buy the rottedvan we have removed the eng and 5frwd box and mated the tranny back to the engine, we have removed the Rn46 cab and have jus mocked up the LN130 bare frame, the chassis is rolling and will be soon going to Jeff to do some brackets and welding for us..... 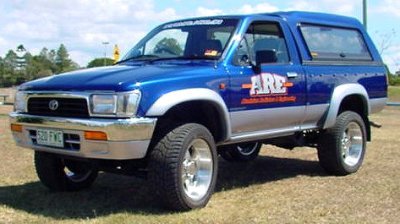 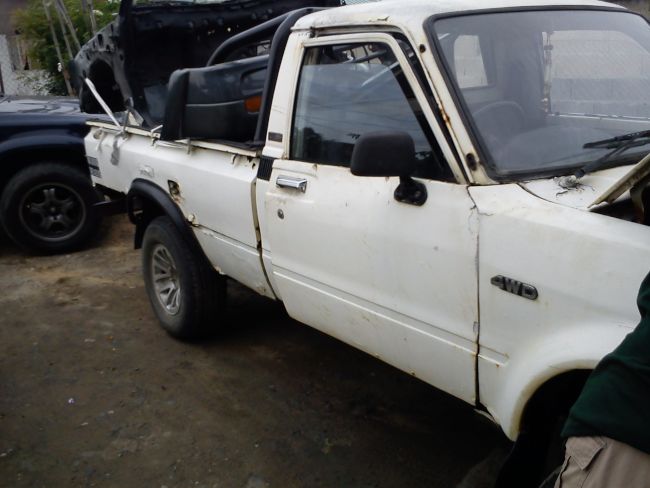 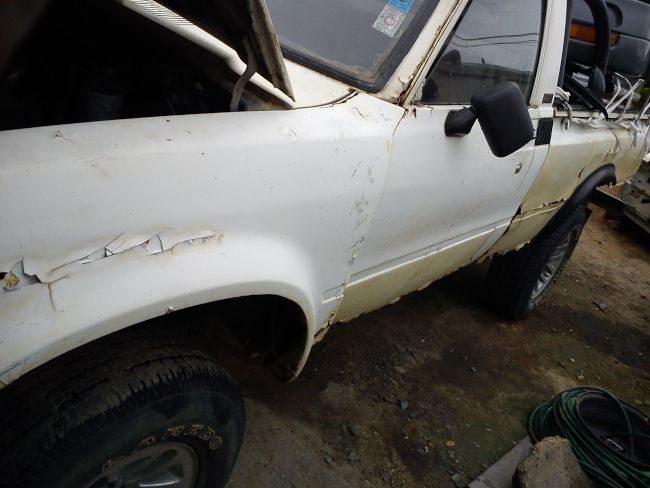 oh myy!! cant wait to see the progress of this... *awaits*
Top

yup its a real nice project, but like all will take some time, we trying to push as much and have her up and running as soon as possible, then we will go onto lifting and stuff......

if anyone know Toyota, they will know of all the pickups of yesteryear the were least prone to chassis failure, and this one chassis stand up like man over the years!!!!!!!!!!
Top

Droppa where this taking place?
By you?
May i come and macko? Pls.
Top

yup, this one take lixx like dat, well at least the beating i put on it......

we brought this from rio claro to la romain to cunupia in the weee hours of the night, then to grande and back for the tray load of parts u seeing on it, the grabox had 3 tighten bolts on it, and the bell housing cracked, and the two front apron let go from the cab and dis make it and back no issues...


taking some risks there, but she still proved faithful.....
Top

D way dis man drive it....And still reach where it had to reach....and still doo all that wok....when we see the apron detaching itself from the cab....we were like

Nice project man, If you need help give me a shout!
Top

yeah man, anytime u wanna come tru and we workin on it jus pass in, make sure and bring cold ting eh......
the engine bay when we brought it in, 3L and 4Y 5fwd, working healthy and strong....... 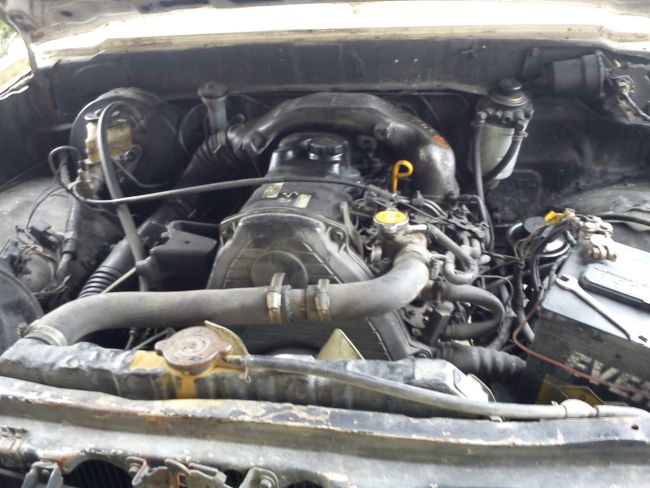 they really made these to take some jamming..... 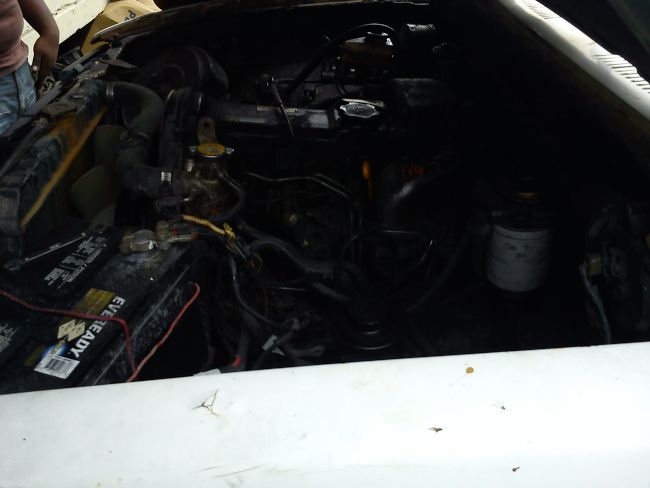 this were we at as of saturday morning, engine and box pulled out and cab started to scrap... 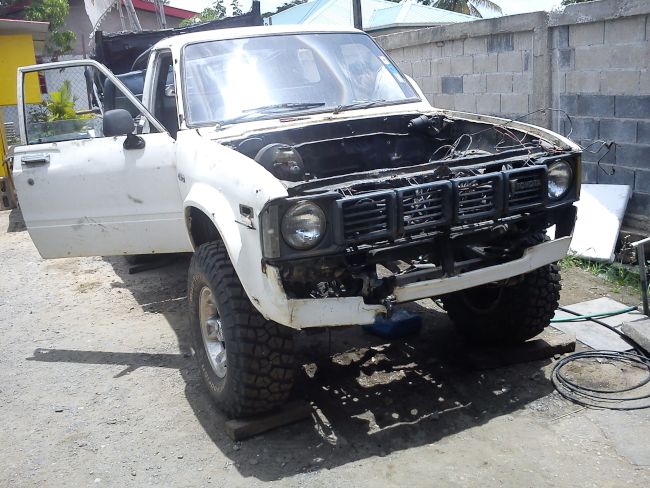 when you see these shoes on a jeep, you know is not no child's play thing.... 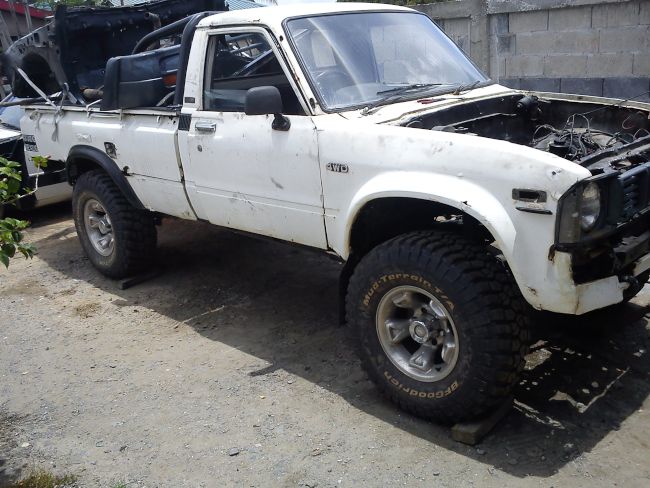 Yup...Build is going great....Don where you get that pic hoss? That van looking real bess!!! I wonder if it is d same chassis though...

So front surf shell on and just bought the doors...Now to mount onto the chassis..
Top


over the weekend we went and bought the bare surf half and brought it home. we took out this old cab, then coupled the tranny to the engine, that was on the ground and was waiting for some correct bolts, the engine and tranny was coupled and was set in place, both engine mounts were connected and tightened up, the tranny mount bracket will have some work to do as the 2LT trans is longer than the 4Y box, thus resulting in driveshaft work to be done too...... so the trans jus resting on a block of wood on the bracket, a temporary hold up.....by now the side b signal was out and more help had arrived....a few more bits were fixed and then later that evening the bare surf cab was moved into place.............

Jeff came and looked at the job and is ready to start some fabrication work for us, after that sh may go straight to Poon to complete the cab and then to the electrician to wire up.....

SNIPER 3000 wrote:Droppa where this taking place?
By you?
May i come and macko? Pls.

Terry pass for me.....this starting to get interesting.
Top

something missing from here man...... 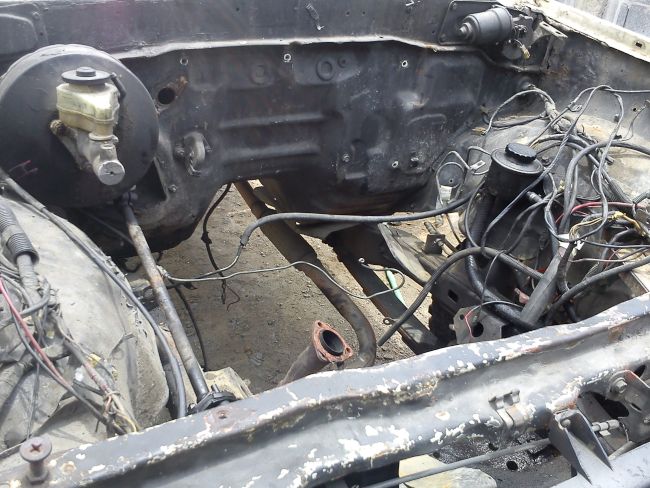 lucky to stumble on this, and price was even better deal..... 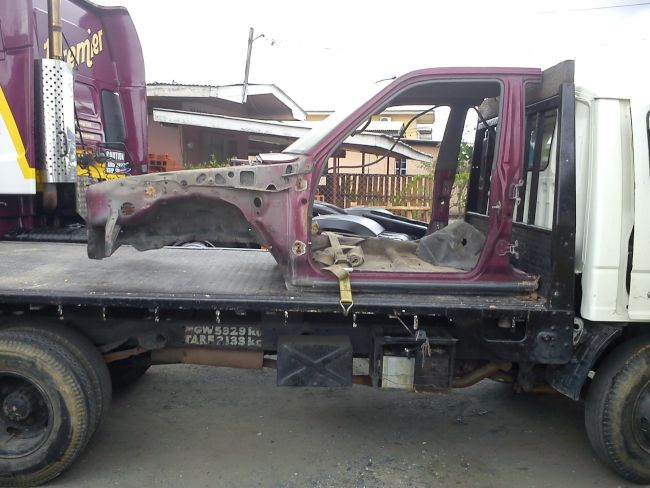 slightly brutalised, but still in great shape for out purpose 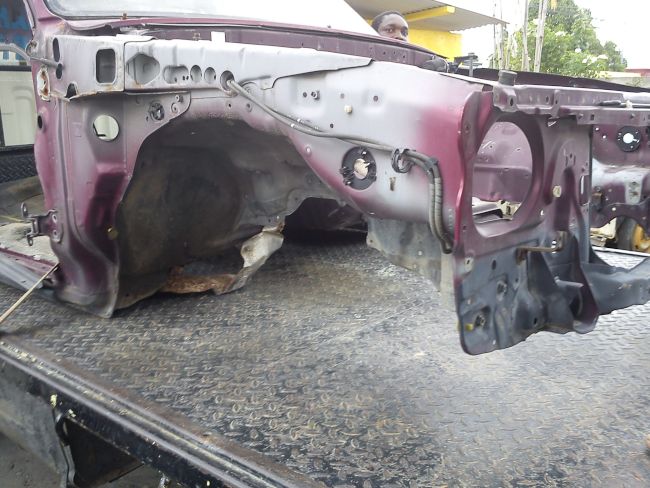 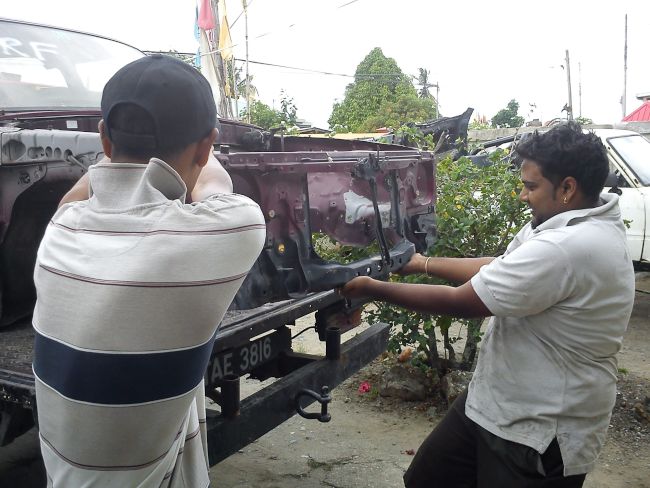 no need for hiab with these guys..... 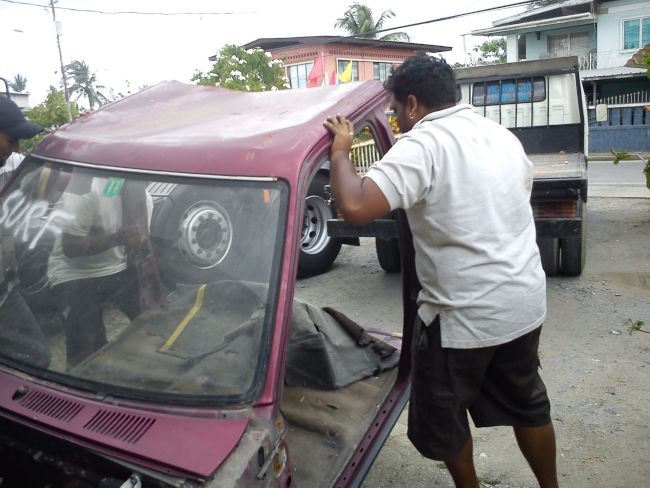 This is going to be a monster!
Top

lucky to stumble on this, and price was even better deal.....

slightly brutalised, but still in great shape for out purpose

no need for hiab with these guys.....

boi droppa u supposed to post sum pics wen we were taking it apart!!!that was real fun......
Top

rottedv wrote:D way dis man drive it....And still reach where it had to reach....and still doo all that wok....when we see the apron detaching itself from the cab....we were like

only a toyota driver can drive a toyota.......we real do it to that van on the way home from rio, guess was a make or break situation, and guess what, it didnt break, it brought us home, safely......
Top

Nice, but lemme know when you wanna turbo charge that 3L!
Top

Well loco, we have some questions for you!!!! I will call you today...
Top

rottedv wrote:Well loco, we have some questions for you!!!! I will call you today...

You got the right person there boy ...the original Hilux Ho!
Top

yeah loco, i tell the man call yuh and talk with u on some matters of concern.....

btw, do u have any idea where we can source a back for the cab, the straightener says it will make life more easy and it will look better than is we jus sheet it off...
Top
Advertisement
Post Reply
300 posts

Users browsing this forum: No registered users and 8 guests