Suicide attack at the airport, bomb in the metro. 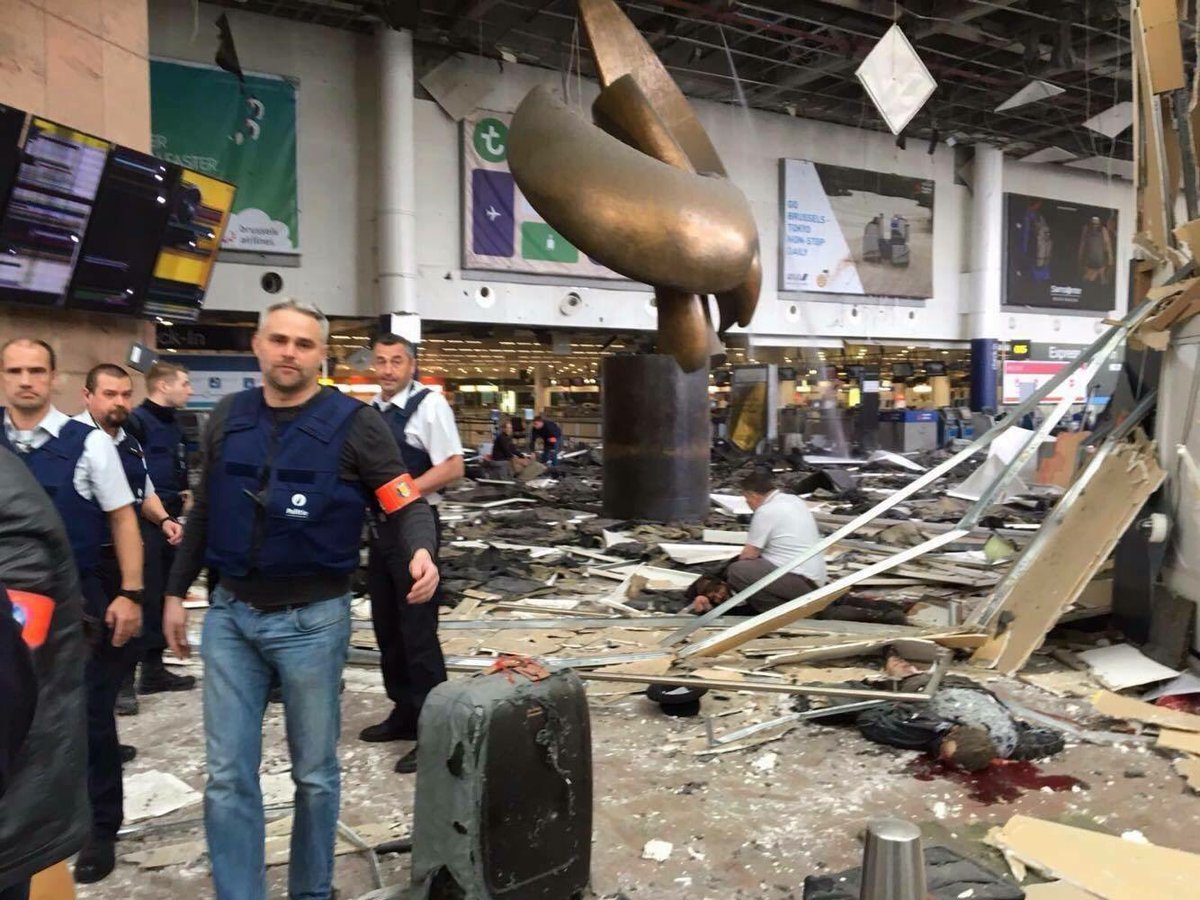 Just a few days after they caught the Paris suspect.

rom Belgian national radio: 'Government source' says it was a terrorist attack. Police sources talk about casualties.
9:10: radio now reports that possibly a third bomb was found at the airport
9:13: entire Belgium now in highest terror level (4). All other airports closed off.
9:17: ring road around brussels will be closed off soon
9:18: central train station in Brussels is being evacuated according to national radio
9:19: it seems it's the metro station connected to the central train station
9:20: 1-20 casualties reported by national radio
9:22: french-speaking radio now report EXPLOSIONS in METRO. Multiple people exiting metro with bloody faces
9:25: people are reporting smoke next to metro station:https://twitter.com/PaulineArmandet/status/712192021516165122
9:29: live feed belgian national television now contains reports about metro attack. It's station Maalbeek in Brussels.
9:31: another tweeted image: https://twitter.com/GillesKLEIN/status/ ... 7684968448
9:32: all metro stations in Brussels will be CLOSED
9:34: there is now an official emergency number: 02 506 4711
9:37: apparently metro station Schumann is also affected. Both of these metro stations are in the European quarter of Brussels.
9:40: I have to go now. Might keep updating, but more sporadically
9:54: latest reports 13 deaths [EDIT], more than 30 severely wounded. A university in Brussels is being evacuated (ULB)
10:24: just heard a report that people have to walk on the tracks to get out of metro station in Brussels
10:25: Belgian officials are asking for not to use cell phone in Brussels, but to use social media instead.
10:30: Brussels airport closed at least until 6am Wednesday
10:37: Red cross Belgium has made website for people to find each other in Brussels: \http://ikbenveilig.rodekruis.nl/brussel
10:40: apparently central station in Antwerp is being evacuated atm
10:43: officials are asking people in Brussels to stay where they are
11:00: from radio news: more and more official buildings in Brussels are being evacuated
11:00: one explosion at airport was suicide bomber, second one was bomb package
11:00: all public transport in Brussels has been shutdown
11:00: schools in Brussels and Flanders are asking to keep everybody inside
11:08: Belgian prime minister is planning a press conference
11:10: belgian mobile phone network provider are again asking not to use phone network in Brussels.
11:16: car tunnels in Brussels being closed, strict checks at Belgian/French border
11:18: central station in Antwerp is open again
11:23: Facebook has activated safety check for Brussels: https://www.facebook.com/safetycheck/br ... march2016/
11:27: Belgian report says there might have been explosion near parlement now
11:28: 225 extra soldiers are being sent to Brussels
11:34: Belgian radio now says explosion near parliament was a controlled explosion by police.
11:41: live press conference prime minister is starting
11:42: PM confirms two attacks: airport and Maalbeek metro station. Extra security by military.
11:47: PM repeats emergency number: 1771
11:50: From press conference: attack Maalbeek happened 30 min after airport
12:26: Paris will project colors Belgian flag on Eiffel tower tonight
12:34: Hashtag if you want to help people in brussels by for example giving them a ride: #ikwilhelpen
12:36: officials are asking people on the VUB university campus Etterbeek to immediately go inside
12:46: person replying to this comment claims to be at the prison where Salah Abdeslam is being held (Bruges), and reports about a bomb threat in that prison. https://www.reddit.com/r/worldnews/comm ... rt/d1904xu
13:00: Bomb threat in prison Bruges seems to have been a false alarm: http://www.nieuwsblad.be/cnt/dmf20160322_02196377
13:06: ULB university is asking to evacuate campus: https://www.facebook.com/ulbruxelles/
Top

sheit, have to call my friend there.
Top

All this helps Donald Trump's cause though!!!
Top

4 is the mark today
Top

Album of the destruction. NSWF

who is that dead in the pic??

Reports are that ISIS claimed responsibility and suicide bombers
Top

These are the three culprits. Two blew themselves up and the other is on the run. 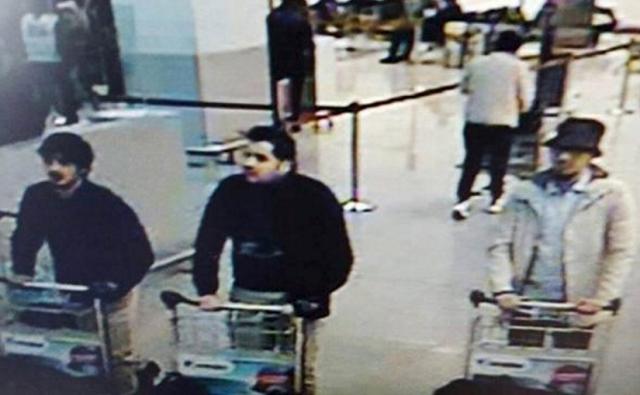 Dizzy28 wrote:All this helps Donald Trump's cause though!!!

They HELD ONE of them,, hope they TORTURE his ass for information.. you really have to be a Born Dumbass to end up being a suicide bomber.

Well it is their belief that they will go to a land of milk and honey and have sex with 12 virgins, after doing their suicidal acts. Jihad business.
Top

to have citizen of their country living in perpetual fear ... since it is known that several countries are seeking to leave the EU or not have their sovereignity eroded by EU laws. there is a push by the EU to now have EU police force and military force much similar to NATO
Top

Do they get 72 middle aged housewives when they enter heaven?
Top

http://www.msn.com/en-us/news/world/sui ... li=BBnb7Kz
LAHORE/ISLAMABAD, Pakistan, March 27 (Reuters) - A suicide bomber killed at least 65 people, mostly women and children, at a park in Lahore on Sunday in an attack claimed by a Pakistani Taliban faction which said it had targeted Christians.

More than 300 other people were wounded, officials said.

The explosion occurred in the parking area of Gulshan-e-Iqbal Park close to children's swings. The park is a popular site for members of Lahore's Christian community, many of whom had gone there to celebrate the Easter weekend holiday.

Witnesses said they saw body parts strewn across the parking lot once the dust had settled after the blast.

"When the blast occurred, the flames were so high they reached above the trees and I saw bodies flying in the air," said Hasan Imran, 30, a resident who had gone to Gulshan-e-Iqbal Park for a walk.

Officials said 65 people were killed and about 300 wounded. Police Superintendant Mustansar Feroz said most of the casualities were women and children.

The Taliban faction Jamaat-ul-Ahrar claimed responsibility for the attack.

"The target was Christians," a spokesman for the faction, Ehsanullah Ehsan, said. "We want to send this message to Prime Minister Nawaz Sharif that we have entered Lahore."

"He can do what he wants but he won't be able to stop us. Our suicide bombers will continue these attacks."

Islamist militants in Pakistan have attacked Christians and other religious minorities often over the past decade. Many Christians accuse the government of doing little to protect them, saying politicians are quick to offer condolences after an attack but slow to take any concrete steps to improve security.
Top

It's really upsetting what just happened in Pakistan.
Top

They claim they get rewarded with virgins when they are martyrs......
Top