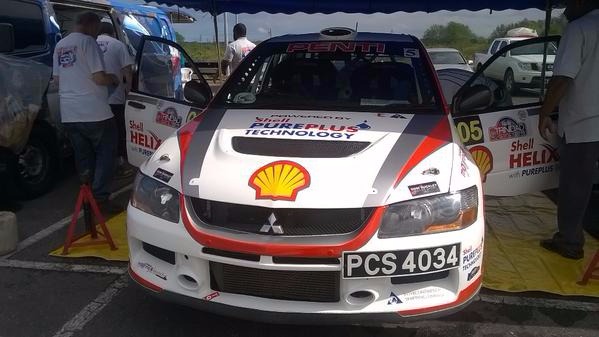 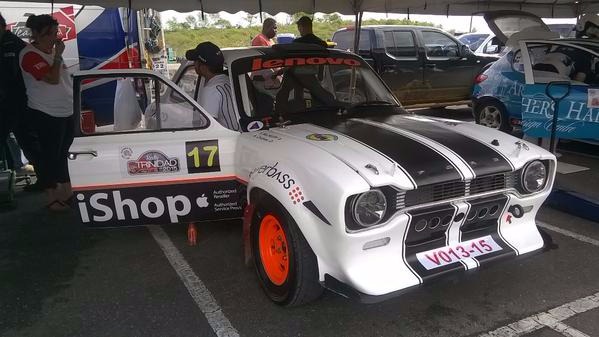 Overall Leader and 2WD leader at the Service Park

come check us out at Brian Lara Stadium!
Top

Powell shows them the way!

After a successful scrutineering session at Mosportt Restaurant & Grill last Wednesday, fans began pouring into the Hasely Crawford Stadium as early as three o’clock in anticipation of the first two stages of Rally Trinidad 2015. Despite the start of SS1 and SS2 being more than three hours apart – keep track of the Stages Directory on rallytrinidad.com - there was plenty to keep the fans interested, the venue bristling with activity as teams put the final touches to their cars, sponsor decals, competition wheels and tyres.

TTDA ripped the stages wide open with a sensational display of precision driving. Four of the club’s top competitors– Kerry Phillip (DWO), Roger Hutcheon, Devon Bartholemew and Imran Khan took to the stages leaving large double black lines for the rallycars to follow and passing within millimetres of the concrete planters. Then they returned to the course in tandem formation, two at a time, ending with a tandem park and a long double burnout.

Kristian ‘BoodooStig’ Boodoosingh brought his ex-Daniel Ramoutarsingh Evo VI (aka Natasha) to play and function as car ‘0’ for the stadium stages. His car exhibited nearly zero body roll and traction was hard to come by but he easily drifted around the triangular roundabout and 180-degree turns. “I have near-zero traction out there, the handbrake lever is definitely my friend. The car isn’t set up for this surface but I am having so much fun” said an excited BoodooStig before the start of his second run.

The field ran in reverse order, to build the hype towards the fastest competitors, so SS1 action starred with the Lifestyle Motors Suzuki Swift, normally driven by Ryan Peyrau. As he is contesting the opening round of the Suzuki Challenge Series in Barbados this weekend, his co-driver Simon Rodriguez took the wheel.

Once the dust had settled, four-time winner of the country’s premier event, John ‘Penti’ Powell had made his intentions known early. With Nick Telfer in his Group N Mitsubishi Lancer Evo IX, he was fastest on both stages, opening up a 2.12-second lead over Group A front-runner David Coelho, and nearly 5secs over his closest Group N rival, Stuart Johnson. Coelho and Harris (Evo IX) were fifth and second Friday night, starting Saturday morning just 0.12s ahead of James Betts/Sean Abed (Evo VIII) – fourth and third – with Cristian Bourne/Jesu de Gannes (Evo VIII) only one-hundredth of a second behind, lucky to have moved a plastic barrier without damage. Having been second on the first run, Johnson and Lee Quesnell (Subaru Impreza N12) slipped to sixth on the repeat.

In the two-wheel-drive classes, honours were shared among the overseas crews – Ireland’s Frank Kelly, now sporting Kendall Oil sponsorship, and Paul Fitzgerald in their Ford Escort MkIIs were the top two on SS1, split by just one-tenth, with fellow-Irishman Shane McGirr coming to the fore on SS2 in his Toyota Starlet, with Stuart McChlery of Barbados second in his Lenovo-liveried Escort MkI, 2.7secs adrift.

The teams were all optimistic, even the tumbling pair of Scott Sheppard and Anand Awai, who rolled their Ford Escort MkII some seven times at the last event (Rally Shakedown). Ansel’s Ali’s local rotary-powered Mazda 323 also managed to swing from corner to corner in well-sorted fashion.

The stadium stages are good for a confidence boost, but the real business starts today, once this healthy field of rally cars leaves the Service Park at Tarouba Stadium and gets to stretch their legs on the fast flowing stages at Reform (8kms, run six times) and Bronte (two at 11.4kms, two at 11.3kms).

Friday night’s dramas were limited, although Gobin Mahadeo (Impreza) had engine problems, James Harris had cradle damage on his Rover 200, while both Ryan Pinheiro (Evo IV) and Ishmael Khan (Starlet) incurred 15secs penalties for missing out part of SS1. Coelho’s Evo IX hit a curb and sustained damage to a control arm and brake disc near the finish of SS2, but the service crew made quick work back at the shop and the car will be back out for the first gravel stage at Bronte in the morning.

Joel Jackson and Dmitri Dawkins had an off, their STi seen here embracing a tree in Bronte. 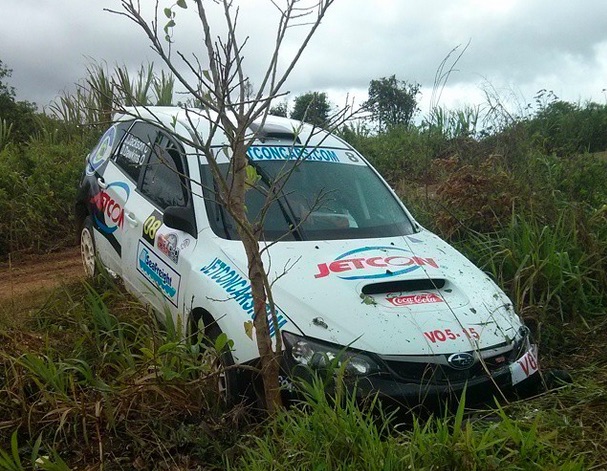 utenjm: "Life comes at you fast. Or is it ditches? We safe. Service crew working assiduously to get us back running. #rallyTrinidad"
Top

Frank Kelly on SS4 at Bronte 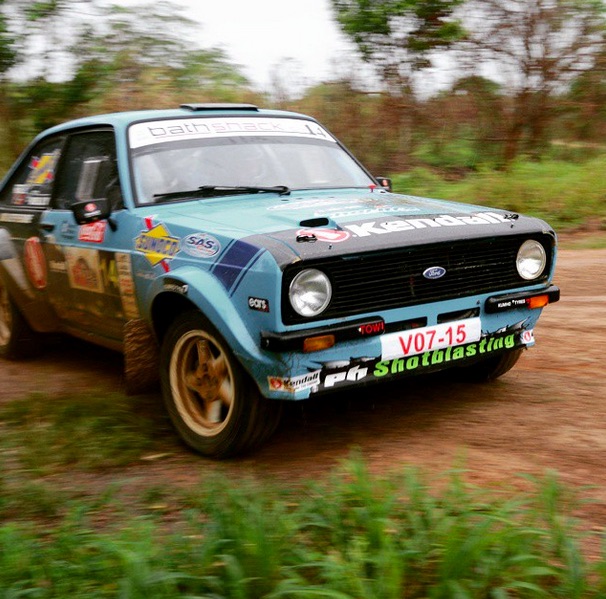 Bronte has been cancelled for the rest of the day due to bad surface conditions. All remaining stages today will be run at Reform only #rallytrinidad

There's a query with stage time for car # 4 on SS3. Waiting on marshal sheets to verify
Top

Around Golconda just before lunch, i saw some dunce in one of these cars, driving as though he thought the public road was a tarmac stage

tourniquet wrote:Around Golconda just before lunch, i saw some dunce in one of these cars, driving as though he thought the public road was a tarmac stage

you remember which car it was?
Top

From last night..... Christian Bourne and Kristian Boodoosigh as well....WHOA!!! Impressive driving in such close quarters....

John "Penti" Powell is out with a broken gearbox. He was maintaining a good lead but will have to retire for the day. He said the crew will try to have the car back out tomorrow.
Top

(provisional) Overall place as of SS9

(provisional) Overall place as of SS10

Seems due to a previous miscalculation, Betts may be leading. Will update with results in s bit.
Top

After Friday’s night’s short sharp shock treatment around the Hasely Crawford Stadium in Port of Spain, the hardy crews who set off from the Service Park at Tarouba first thing Saturday to tackle the real business of Rally Trinidad 2015, have, without doubt, been reminded of just how tough motor sport can be.

As they moved into the fast flowing stages at Reform and Bronte, everything that can befall a competitor has done so in a dramatic day of Caribbean rallying, with accidents, mechanicals failures, challenges of communication and the weather all playing their part in equal measure. So much so that only eight crews remain in the running for overall awards, having completed all 11 stages so far run . . . there are many others still running after repairs, so Sunday will still be a spectacle worth seeing.

Overnight leader John Powell, as determined as ever to prove that a Group N Mitsubishi Lancer Evo IX can take on the best that Group A can offer, maintained his advantage with two stage wins plus two top three finishes in the morning’s first four tests; a broken gearbox brought his charge to an end, however, but he said the crew will try to have the car back out for Sunday. Rain created some major issues in the Bronte stage, with the surface so slippery that even marshals and the media blessed with off-road 4 x 4s were having difficulty traversing the course; after the morning’s final run through Reform was abandoned, quick-thinking by the Trinidad & Tobago Rally Club and a lunchtime drivers meeting led to the afternoon stages all being run at Reform, two forward and three reverse.

The second Bronte also accounted for one of the potential winners, David Coelho (Group A Evo IX); second overnight and in the top four on the morning’s first two stages, he had already slipped back, outside the top 10 on SS5, then went off in Bronte, later to retire with a suspected broken cam sensor.

With the overnight class-leaders gone, a superb battle was developing between James Betts of Barbados and local Cristian Bourne, both in Group A Evo VIIIs, and last year’s Group N winner, Stuart Johnson (Subaru Impreza N12). All kept in the top six during the morning, and continued to do so in the afternoon – each claimed at least one stage win - Betts trying particularly hard, as a miscommunication of data early in the day led him to believe he had a big chunk of time to make up . . . ‘twas not the case, but it was well worth the watching as he tried to do so! Others staying with them much of the time included Ryan Pinheiro (Evo IV) and Jamaica’s Joel Jackson (GpN Impreza N14), but both also soon hit trouble . . . err, twice! After securing delivery of a replacement windshield to the Service Park in record time from Piarco, the second shield was then broken as the crew put the bonnet back on; he retired after SS9 with a shelled out alternator bearing.

Jackson, meanwhile, was not the only driver to visit the scenery during the day, his Impreza embracing a tree in Bronte; there were worse problems for Suriname’s Radj Persaud (Impeza N12), who was parked on the stage with problems, only to be hit by Junior Phillips (Lancer GSR). Shortly after Phillips broke all the studs on a rear wheel.

Life was not much easier for the two-wheel-drive crews, particularly the indenigous ones, as the overseas visitors were having a field day! Ireland’s Frank Kelly and Paul Fitzgerald were bouncing around in the top 10 in their Ford Escort MkIIs, doing “just what it says on the tin” in Irish rallying . . . but it was fellow-countryman Shane McGirr in his Toyota Starlet (the only one of the three without the benefit of local co-driving knowledge, his girlfriend Jackie Elliott reading the notes) who was doing the winning! When Fitzgerald’s engine let go shortly after lunch, which spelled the end of his Caribbean adventure (the first of many, we hope), it left McGirr and Kelly in fifth and sixth places overnight and the only two 2wd cars still in the overall running. The eight were completed by the Subarus of Barbados Motoring Federation president Andrew Mallalieu (N10) and Barbados-based expat Brit Harold Morley (Sti R4), who had both kept their heads while all about them were losing theirs . . .

Twelve more stages face the field on Sunday at the popular Snake and Jack and Jill venues, with the whole weekend building to a fantastic climax at Preysal for the two SuperSpecials starting around 3.00pm. If there’s nothing else in your Sunday diary, you should be there! Here are the provisional results after SS12

Nice morning read. Off to MTC at Preysal.
Top

Really excellent write up with the overnight information.

How does a Rally Driver balance that desire to straighten out every corner and then this..."to finish first you must first finish?'
Top