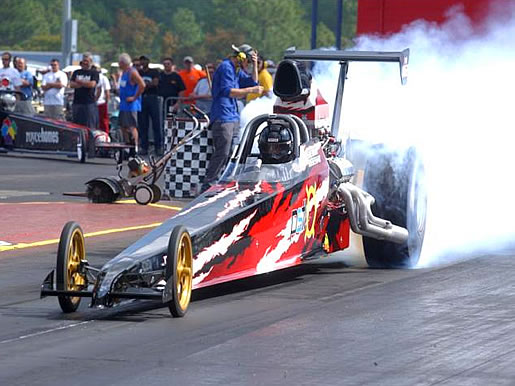 At Rockingham Dragway, Rockingham, North Carolina, Sheldon Bissessar, who lead the Trini team, piloted his Top Dragster down the 1/4mile with an ET of 6.45 seconds.

This time has echoed through the halls of drag racing around the world since 6.45sec is the fastest time a gas and nitrous Top Dragster has ever done using a converter instead of a clutch engaged transmission!!!

Sheldon's dragster, flying the T&T flag on its US campaign is actually a Spitzer Racecars prototype/hybrid carbon fibre one-piece body and interior on a Chromalloy Top Dragster chassis (IHRA & NHRA certified). Its 706 cubic inch, all aluminum, pro mod motor is mated to a Lenco 2-speed transmission with a specially built Coanâ€™s converter in a Bruno Converter Drive. Sheldon has been babying this monster, making very calculated runs with the converter configuration before moving on to a clutch system which will really exploit the true potential of this rail. Little did he know that he would unintentionally break a world record while sorting out the car on this transmission.

Converters in themselves aren't the most controllable launch mechanism even in simple drag race cars. Anyone who has loaded up their automatic tranny to launch their car off the line may have a rudimentary understanding of what this is about. A clutch allows much more control from the driver. A progressive nitrous system helps to reduce some of the tyre shake these high horsepower machines with massive slicks suffer from when fed through a converter.

Sheldon has managed to fly this dragster through the finish sensors at trap speeds up to 209mph, with 60 foot times at around 1 second.

This isnâ€™t the first record Sheldon has brought to T&T. He himself is also the fastest man in T&T given these times. One thing that he hasn't forgotten though is his national pride when racing in the US. Even though he has no place to race his car back home in Trinidad, there is always a T&T flag and the colours red, white and black on his car and team uniforms. Always closely monitored by the support team of mechanics, technicians, crew chief, crew and supporters (both local and foreign).
This year his 2007 season is shorter than the previous years but they intend make the best of it. Minor upgrades will be done to the systems to enhance their performance. Future up-grades may see the installation of a clutch system with a three speed gearbox and flow bench tested nitrous system.

Wow amazing stuff...many congrats to him and his crew!!!
Top

great work and congrats to them
Top

Whey ...this man large over there

Tell Them We Reach

Big up to Sheldon and the Party Time Racing Team!!!
Top

Kudos to a magnificent run..
Top

and to think the Gov. of T&T has no regard for drag racing !!!

The gov. should really pump some kind off fund into this sport.......cuz people are investing 100's of thousands of their own dollars into their projects and have to race it on the streets.........thaz just my 2 cents
Top

there are lots of stats that cna be used

and nothing to do with FIA
Top

I said once and I will say it agin....little trini have more talent than most big countries.....its just we dont get the support the big countries give...............I know many guys in trini that will run rings around many top drivers and race engines.........just my 2 cents
Top

Proud to be 3ne!
Top

The only way Mannin recognizing them is if they make national news. Then yuh guh see him come runnin claimin he was always behind them and they always had his and the government support. Bunch of arseholes.
Top

is that the chevron rail?
Top

Congrats to Sheldon and his Team.

there are many undiscovered Drivers for the diffrent disciplines right here in Trinidad & Tobago.

If only we could get organised and show the rest of the world we could do more than kick ball and bat.

BTW, allyuh feel he will be willing to bring his nice shiny fast rail to run on the Caroni 1/4 mile that will be opening soon ?

Good representation by Sheldon and his team here....
Top

well done to the party time crew,
fellas you doing a good job keep it up
Top

Little did he know that he would unintentionally break a world record while sorting out the car on this transmission.

The only way Mannin recognizing them is if they make national news. Then yuh guh see him come runnin claimin he was always behind them and they always had his and the government support. Bunch of arseholes.

Users browsing this forum: No registered users and 37 guests